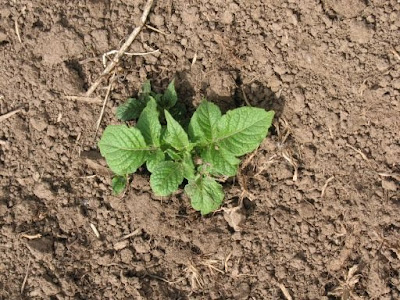 Hurrah! Our potatoes are coming through at long last. It was on April 12th when I planted twenty four seed potatoes of the Pentland Javelin variety - at the top of the garden in the vegetable plot that we have partially resurrected after several years of lying fallow. I'm talking about the land not the owners!
The seed potatoes were bought in mid-February and I had them "chitting" in a tray near the french doors. My little babies - pushing out stubby little shoots. Now those same shoots have grown, forcing their way through weather-baked clods of clayey soil to reach for the sun. All being well in a couple of weeks I will be earthing up these potato plants, making domed ridges in which new potatoes can form.
It's been really dry in Sheffield for the last couple of months - hardly any significant rain showers. Now that the plants are poking through, I think I will have to give them a good drink. The weather forecast for the rest of this week is super with temperatures rising to 25 degrees centigrade and more importantly for plants - mild night-times. About ten days ago the temperature dropped below freezing on three consecutive nights killing off my beautiful little courgette plants so I immediately had to sow a few more in indoor pots. I've also got broad beans on the go and plan to sow some dwarf beans in the next few days.
We planted ten raspberry canes and the five Glen Amples have budded and leafed nicely but the five Mallings are more moody. Two of these canes look as if they prefer death to life.
Speaking of death, I'm going to a funeral tomorrow. Alison. I reckon she was fifty nine. I met her through work in 1980 and though I never really "clicked" with her as true friends do, we frequently bumped into each other and politely passed the time of day. She was intelligent, a socialist, a teacher, a mother and a feminist with spirit and a zest for life.The last time I saw her was at the morning cinema screening of "A Prophet" back in February. What took her? It was a second appearance of skin cancer that this time invaded her brain. She died in our local hospice ten days ago. Mourners are asked to wear something red at the funeral but I don't think my plastic clown's nose on elastic would do. Perhaps a tie instead. Yes. A red tie to say goodbye.
- May 20, 2010