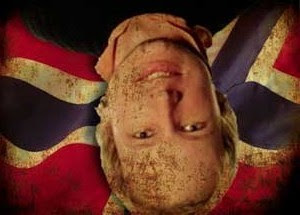 This is Anders Behring Breivik. I turned him upside down because that is what he has done to Norway. Blonde-haired, fit as a fiddle and blue-eyed - not the stereotypical image of evil. Not only did this egotistical monster callously destroy the lives of some of his country's most promising young people, he simultaneously concocted a sadness that will seep through the fissures of Norwegian society for many years to come. What was he thinking of and who the hell did he think he was? I picture him sitting smugly in his cell, smirking as he imagines that he has single-handedly shifted the direction of Norwegian politics, striking a blow against multiculturalism, standing up for old conservative values. What a dunderhead!
His Viking forefathers devised various methods for disposing of wrongdoers such as the "blood eagle" torture in which the victim's ribs would be cut at the spine and then forced out laterally in imitation of an eagle's wings. His lungs would then be pulled out of the chest cavity with salt sprinkled on the resulting wounds. Even though Breivik is clearly completely mad, the "blood eagle" ending would surely suit him fine - instead of twenty one years in a warm, dry Norwegian prison with a flat screen TV, games of pool and three square meals a day.
His killing spree will no doubt quietly strike a chord with other right wing extremists whose perceptions of the world are equally warped. My heart goes out to Norway, to the grieving parents and friends, to the shattered tranquility of a quiet and civilised country. Anders, Anders, Anders...what have you done?
In Henrik Ibsen's "An Enemy of the People" (1882), Dr Stockmann says "The strongest man in the world is he who stands alone." But Ibsen's character was just as wrong as Breivik was on Friday afternoon. The strongest people are those who stand together for the things that matter - for freedom, family, kindness, life itself and the future of humanity.
- July 24, 2011