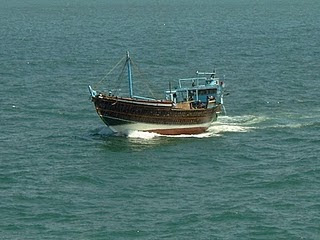 For three days and three nights I drifted westwards on this placid ocean. The days were searingly hot and the nights were full of phosphorescent stars. Though I rationed myself, I soon  ran out of water and had to resort to coconut juice. Lying there in that flabby orange vessel, I thought that my number was up - especially when I noticed I was being circled by a ten foot pelagic thresher shark. But sometimes miracles happen.

Early on the fourth morning I was woken by the phut-phut sound of a fishing boat and beyond it I could make out the misty faraway peaks of some islands - perhaps the Andamans or the Nicobars. Weak and thirsty as a plughole I nonetheless stood up in my craft and waved my Hull City first team shirt above my head shouting "Help! Help!"

It would have been so easy for the fishermen to miss me but magically they turned in my direction and soon I was rescued.

The dilapidated boat is from Colombo, Sri Lanka and there are five sun-baked fellows on board including the skipper Nalin who speaks passable English having once worked in the engine room of  a cruise ship. They were very kind and soon watered and fed me before continuing on their voyage. They had planned to anchor off the island of Bompoka in the Nicobar group - exchanging baskets of deep water fish for fruit and fresh water. I snapped this picture of Nalin with a sailfish. What an amazing creature:- 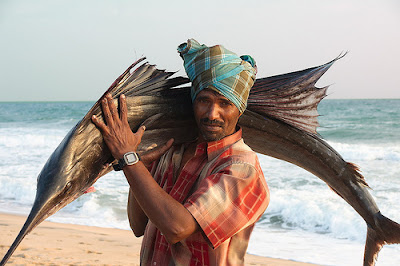 I managed to recharge my laptop on Bompoka. The jolly chief of the island started up his kerosene generator specially which was very kind and I was able to show him pictures of the new Hull City first team shirt modelled by the celebrity glamour model Jordan who is revered in Bompoka as a goddess.

Just before nightfall we upped anchor and continued our journey westwards to Sri Lanka. I have been teaching the crew Rod Stewart's song "Sailing" but they're almost as bad as the Burmese servants were in Blogland when I tried to teach them the national anthem - "Island of Dreams" - though it was far from a dream for Thuza and Arun.
- June 27, 2012