Switched our main computer on this morning, planning to do some surfing around while I ate my coco-rice but straightaway this vile page appeared:- 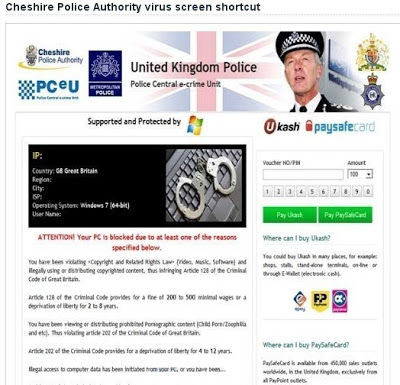 Basically some nasty, spotty armpit-stinking scumbags are putting this malware out on the net to try to scare people into shelling out hard-earned money. They frighten you by saying your computer has been used to access illegal sites or has broken copyright laws somewhere along the line. You have seventy two hours to pay your spot fine or you will receive a visitation from the police and your computer will be confiscated.

At first I thought, "Oh no! I knew I shouldn't have visited Going Gently so much! Or viewed those rude pictures of mature Brisbane bloggers" But then when I was having my mid-morning shower - soap bubbles cascading down my tanned and manly torso - it occurred to me that this could in fact be a scam. Fortunately we have two other computers in the house and we were able to quickly establish that the ostensible police warning page is a widespread scam that has affected thousands of people - though previously we hadn't heard of it. And I also ask myself - why the hell did we pay good money to AVG to prevent viruses, trojans and all those other nasty enemies of normal internet use if the service doesn't actually work?

The bugger is an absolute nightmare to address and solve. I went through recommended steps only to find that something has probably and accidentally been removed from the computer's guts. It is possible that I did that myself as I was messing about or it could be an extension of the original scam. What the hell is CRPT32.dll anyway? I wouldn't want to drink it.

If I could get hold of the sub-humans who have engineered this act of wanton vandalism and selfish interference in other people's enjoyment of the internet, I would happily use my pruning shears to remove vital dangly bits from their pasty and no doubt very ugly anatomies. Grrrrrr!

Dear blogging friends- especially in Great Britain - BE WARNED! And if you discover the threatening "police" page, blocking  normal computer use, don't pay anything! On a different computer you will need to check out tutorials and follow maintenance steps as best as you can or call in an expert. Oh drat...tears on my laptop keyboard now! Aaaargghh!
- June 23, 2013