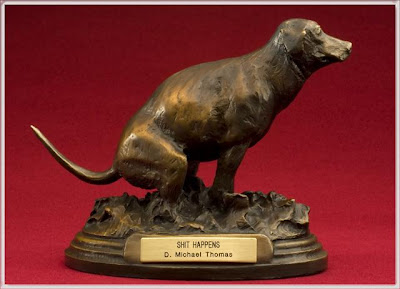 We had a couple of old garden chairs to cast away. I'd brought them to the front of the house intending to drive to what was once called the Dump-It Site but is now Blackstock Road  Recycling Centre. I noticed the half-empty skip (US dumpster) in front of a neighbour's house and so toddled up the street to knock on their door - seeking permission to leave our old chairs in the aforementioned skip. Unfortunately, the neighbours weren't in so, as planned, I did the decent thing and set off for the dump-it site recycling centre instead.

On the way, for reasons I shan't explain, I had to do a U-turn and very slowly this involved mounting a kerb - whereupon there was an alarming mechanical noise - as if the suspension had been badly jarred. I carried on to the recycling centre and discovered that in fact I had a flat tyre.

Previously, I had never had to change a tyre on this car - a Seat Ibiza - so I checked the manual before attempting the operation. Everything was going fine until I discovered I didn't have my vital wheel nut key to loosen the last wheel nut. I looked everywhere and realised I'd have to check at home - three miles away. Up on the main road I flagged a taxi down but when I got home - no wheel nut key to be found anywhere!

Then for more reasons I shan't explain, it registered that I hadn't renewed my Green Flag breakdown insurance so I'd have to pay £108 to receive attention - possibly vehicle recovery too. Another taxi and I was back at the recycling centre. A repairman arrived in his green van - bizarrely a former pupil of mine who has recently become a grandfather! With all of Wayne's sockets and wheel nut keys, he couldn't help so the recovery vehicle was called and both the car and I were ferried back home.

The thing is - we are driving down to Luton at midday today (Monday) for our holiday flight to Malta - no time to get the wheel nut issue sorted. So at eight thirty last evening I caught a train up to Leeds to retrieve Shirley's little Hyundai car which our daughter Frances borrowed whilst I was in Thailand. Then back down the M1, getting home just before eleven.

And as I turned into our street I noticed the yellow skip was still there and by now the neighbours'  lights were on...And the moral of this story is either (a) honesty isn't always the policy or (b) shit happens!
- June 10, 2013