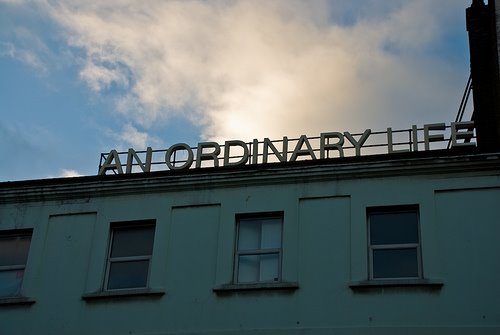 Let's get something down about ordinary life.

This evening I caught the Number 88 bus home from Bents Green where I had attended the Tuesday night quiz in "The Hammer and Pincers". With my chums Mick and Mike we didn't win the  quiz but we won £12 on the "Irish Bingo". You have a small random pack of cards - thirteen in fact - and the cardmaster calls out cards as he withdraws them from the master pack. As the cards are called you gradually reduce the size of your own pack until you have none left and then you call - "Here!" That is what I did - the first time for ages.

Earlier today, Shirley and I were at a funeral/cremation for one of her nursing colleagues. Sue was only sixty six and a victim of liver cancer just eighteen months after she had retired from practice nursing. From first symptoms through to the final curtain took only six weeks. God really does move in mysterious ways though like me Sue was an ardent and unapologetic atheist. She leaves Bob - a loving husband and two grown up daughters who always referred to her as "Mummy".

Last Saturday, Shirley and I were over at Hull City's Stadium of Dreams to watch our team thrash Sunderland 1-0. They had two players sent off just before half-time so in the second half they were intent solely on defence. It was almost impossible to break them down further - but at least we won! Up The Tigers!

Afterwards we met up with our friend Tony - we are still feeling sad that his long marriage with Fiona has crumbled. We had a meal together in "The Duke of Cumberland" and wished that the old times were back when it was me and Shirley with the two of them. Meals out. Football matches. Boozy sessions in pubs and laughter - lots of laughter. I am afraid I still cannot understand what happened to them. Must people always be looking for something more - the crock of gold at the end of the rainbow, the greener grass on the other side?

Tonight I made baked potatoes for dinner (tea) with fried onions, baked beans and pork sausages. I also brushed two large field mushrooms with olive oil and butter before roasting them in the oven. On Sunday I was delighted with the thin chicken fillets I cooked with double cream, chopped mushrooms and a smattering of Cheddar cheese. Very moreish.

Other ordinary stuff. Tonight was Bonfire Night in England. I was aware of a few fireworks going off in the night sky but it's nothing like it was when I was a boy. Back then you spent all your pocket money on fireworks weeks in advance of the great day. There were huge bonfires - twenty feet tall with old pianos and tea chests, planks of wood and cardboard boxes. On top a "Guy" would sit representing another famous Yorkshireman - Guido Fawkes of York. We'd watch as the tongues of fire leapt up to consume him. And later it was back home for baked potatoes and sometimes toffee apples or parkin cake. November 6th would find me picking about the still smouldering embers of the bonfire - seeking out the remains of dead fireworks. I just loved it. Those really were the days.
- November 06, 2013