I know that one or two visitors have been seething with annoyance about my changeable profile picture or avatar. Sorry about that. So far I have been Father Christmas, Alf Garnett, Captain James Cook (greatest Yorkshireman ever), Popeye's arch-enemy Bluto and the bard of Hull - Philip Larkin. But who am I now? Surely you must recognise him? Why, it's King Henry I of England - the only British monarch to be born in Yorkshire.

Yes, he was born at Selby in September 1068, the youngest son of William the Conqueror and he died in France in December 1135. He was the king from 1100 until his death.

He won the support of the Saxons by granting them a charter and marrying a Saxon princess, Edith, daughter of Malcolm III of Scotland. She was known as Matilda after her marriage, a name more acceptable to the Norman barons than her Saxon name Edith. Henry's daughter was also called Matilda. He was an able administrator, and established a professional bureaucracy and a system of travelling judges. He was called Beauclerc because of his scholarly interests. 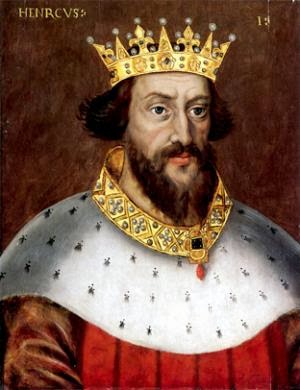 In 1101 his elder brother Robert, Duke of Normandy, attempted to seize the crown by invading England. However, after the Treaty of Alton, Robert agreed to recognise his brother Henry as King and returned to Normandy. They fought again in 1106 at The Battle of Tinchebrai at which Robert was captured and Henry became Duke of Normandy as well as King of England.

An energetic, decisive and occasionally cruel ruler, Henry centralised the administration of England and Normandy in the royal court, using 'viceroys' in Normandy and a group of advisers in England to act on his behalf when he was absent across the Channel. Henry successfully sought to increase royal revenues, as shown by the official records of his exchequer (the Pipe Roll of 1130, the first exchequer account to survive).

Henry's only legitimate son and heir, William, was drowned in 1120 in the wreck of the White Ship and Henry tried to settle the succession on his daughter Matilda and her son Henry (later Henry II). However, Matilda widow of Henry V, Holy Roman Emperor, was unpopular when she re-married into the House of Anjou rival of the House of Normandy. The throne was taken by Henry's nephew Stephen, who, towards the end of his reign, agreed to adopt Matilda's son as his heir.

Henry died in Normandy in 1135 of food poisoning according to legend from eating a 'surfeit of Lampreys' (an eel type fish).During his life he also enjoyed a surfeit of women, using his regal position to take many mistresses and he fathered at least twenty five children. Henry I's body was buried in Reading Abbey after it was returned to England sewn into a bull's skin but the exact location of his grave is uncertain. It is very possible that his silver coffin was removed or stolen during the dissolution of the monasteries as decreed by Henry VIII some three hundred years after Henry I gobbled down those squiggly lampreys. Zzzzzzzzzz....Are you asleep yet?
- February 07, 2014