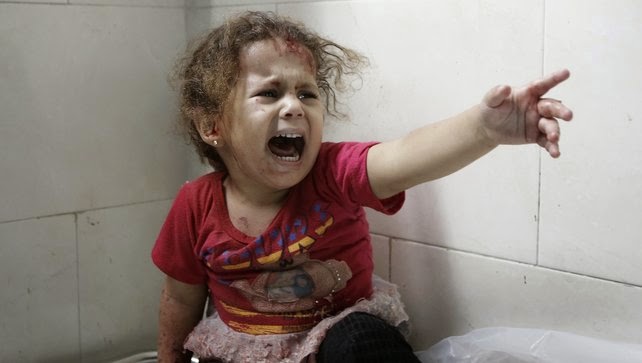 Gaza Palestinians 649         Israel 31
(includes 132 children)                      (includes 28 soldiers)
It's not a cricket match nor a meeting of two great baseball teams. We are not talking about rugby or athletics or snooker, we are talking death. The Grim Reaper. The end of life. Even as we speak, Israel is wreaking havoc in the Gaza Strip with its American tanks and state of the art weaponry while Palestinians fire pathetic "rockets" into Israel  that are not much more deadly than grenades on sticks. If these rockets are such a threat, how come more Israelis haven't died? How come the damage to buildings is so superficial?

We are led to believe that the humane Israeli military machine messages Gaza civilians ahead of its missile strikes - warning them to evacuate their homes. Where are they meant to run to? How much time have they got? How do the Israeli generals know the messages have got through? Can Israeli bombings really be so pinpoint accurate that they always hit their targets and leave the people next door free to get on with their lives?

It is such an unequal conflict and personally I shudder when I hear the justifications and tissue thin apologies of Israeli spokesmen. Obviously, the issues surrounding Israel and the Palestinians are complex - like a tangled ball of wool. I would have no idea how it might be sorted out but killing women and children, bombing schools and hospitals, creating terror in the densely packed streets of Gaza is surely not the way. Talking, agreement and compromise are the only way forward. Ultimately, that's how it has always been.

Dumb Dubya Bush and Catholic Convert Blair promoted a war ON terror, but Philadepelphia-educated Benjamin Netanyahu is now conducting a war OF terror on a desperate people whose lives are not underwritten by America with its vast military arsenal and influential Jewish lobbyists. One things's for sure - the death and terror currently being meted out by Israel will not be the end of it all. It's no solution, no solution at all. If you kick a wounded dog it will bite back. If you put a lid on a bottle of soda water and shake it up it is liable to explode.