On Thursday an English king was re-buried - but in the wrong city. His remains were found two years ago beneath a car park in Leicester. He had been killed in battle not far from Leicester at Bosworth Field in the summer of 1485 but Richard III is mostly associated with Yorkshire and should have been buried in York Minster. He was the last Yorkist king and Lord of the North. He spent much of his life in and around two Yorkshire castles - at Middleham and Pontefract.

Yesterday I visited Pontefract for the first time before another long countryside ramble. There was a windy chill in the air as I walked up to the castle - where I was the only visitor. It had stood for seven hundred years, playing a key role in the defence and development of the north of England. Battles and executions, love affairs and feasts, political discussions and imprisonments. Pontefract Castle saw it all. And when its time had passed, it was reduced to ruins. Local people came to take away stones for their own building projects and today what remains is but a tantalising shadow of the castle's glorious and formidable past. 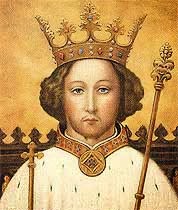 Left - Richard II 1377 to 1399. Right - Richard III 1452 to 1485
A previous Richard, King Richard II died within the precincts of Pontefract Castle in 1399 or possibly 1400 having been ousted from the nation's throne by Henry Bolingbroke (Henry IV). It is believed that Richard II was starved to death - not hacked - and his tragic passing is referred to by Shakespeare in his play "Richard III":-
O Pomfret, Pomfret! O thou bloody prison!
Fatal and ominous to noble peers!
Within the guilty closure of thy walls
Richard the Second here was hack'd to death.
Pomfret is simply another name for Pontefract.

The castle was a Royalist stronghold during the English Civil War of the mid-seventeeth century and it was during this period that the castle was finally disabled forever. As a building complex it saw many changes during its seven centuries as a working castle and today just enough of it remains to absorb a sense of how it must have been.

As I wandered about the ruins with my fleece jacket zipped up to my chin, I noticed that high on the keep, the flag of Richard III had been attached to the flagpole where it was flying at half mast in his memory. He was the very last English king to die in battle.
- March 27, 2015