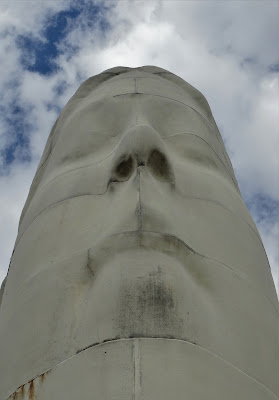 Good art makes my heart skip a beat. It reminds me of what is best in humanity and lifts my spirits. I guess that the majority of people reading this post will feel exactly the same.

Last week, I shared some  pictures from our little trip to Lancashire. One of them was of an amazing sculpture near St Helens. It is called "Dream" and it was created by the Spanish artist Jaume Plensa.

It sits on top of a wooded hill that was once the site of Lancashire's most productive coal mine - Sutton Manor. When the colliery closed and land reclamation was advancing, former miners and the local council decided they would like to sponsor a significant art installation. They gained support from The Arts Council and Channel 4 and before too long they hooked up with Plensa whose work is known around the world. 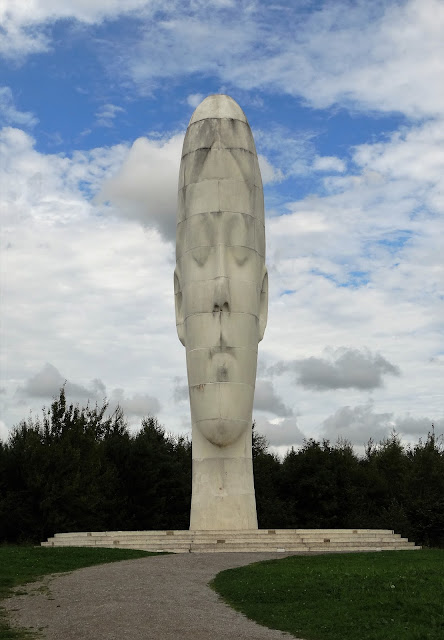 Often such sites will attract predictable  memorials to coal mining but at Sutton Manor the sponsors wanted something different - a symbol of hope perhaps, something beautiful that would send out a positive message to all who came to see it. Plensa was inspired by the project and later said, ""When I first came to the site I immediately thought something coming out of the earth was needed. I decided to do a head of a nine-year-old girl which is representing this idea of the future."

Completed in 2009, the elongated head stands sixty six feet (20 metres) tall and is estimated to weigh over five hundred tons. Its construction cost £1,9 million but personally I think it was worth every penny.

When we got up there, there was at first nobody else around. Just the serene dolomite and concrete head gazing hopefully southwards over the M62 motorway towards the Cheshire plains and the hills of Wales. As we left a family appeared from a different path, as you can see in the picture below. They are standing on the plinth.

Perhaps "Dream" says what you want her to say. But to me she says there's hope, something beyond the everyday if we only dare to dream. Hamlet's words come to mind:-
"To die, to sleep -
To sleep, perchance to dream - ay, there's the rub,
For in this sleep of death what dreams may come..." 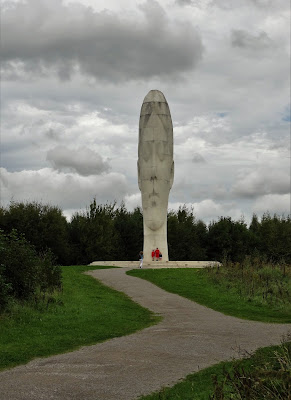