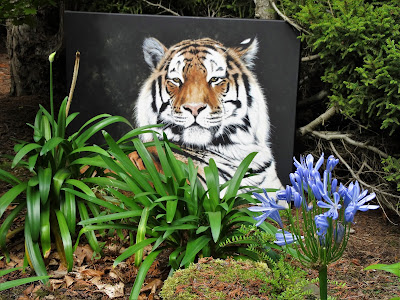 There is a garden centre near Doncaster. It is close to the village of Blaxton. Just to the west of it there was once a gravel pit complex covering about five acres. When this closed, the garden centre people took over the property and lovingly landscaped it so that now visitors would never even guess its ugly history.

I had wandered over this territory with its hillocks, stone follies and imaginative plantings and was returning to my car along a little woodland path when I met somebody. A middle-aged woman carrying a huge picture of a Bengal tiger on canvas. Not something you see every day.

She spotted my camera and invited me to take a picture of her picture. Of course I support a football team nicknamed The Tigers and I told her so as I snapped a photo of her tiger. 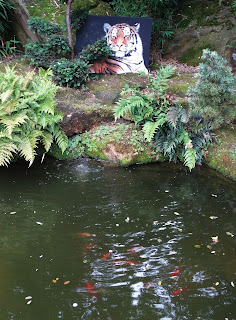 It turns out that she had painted the tiger herself. It is one that resides in the nearby Yorkshire Wildlife Park. The canvas she was carrying around was a print of the original. She was in the garden centre's woods seeking photo locations for her artwork. You see she was planning to sell "outdoor art" through the garden centre and art websites to which she subscribes.

She is a professional artist, normally specialising in horses and family pets. She took to me like a duck to water and very soon we were wandering around the woodland as I took pictures of her tiger in several "natural" situations. She seemed somewhat eccentric and fuelled by high energy tablets or something similar. Dressed in a red vest and blue jeans, she had wild red-brown hair.At one point she grabbed my camera and swiftly adjusted its settings. Not an advisable move.

Anyway, we agreed that I would e-mail the pictures on to her. She had a pen in her car. But when we got to her big black BMW 4x4 she discovered she had lost her car keys. We returned to the woods, retracing our steps but nowhere were the keys to be seen. I asked if they had been handed in at the garden centre reception desk but no.


Back by the BMW, the eccentric artist was phoning the Automobile Association for assistance - at least she hadn't lost her smartphone.  Caroline - that was her name - tapped my number into her phone and said she'd contact me for the pictures. As I left, I said, "Losing your car keys isn't quite  the same as creating art is it?" 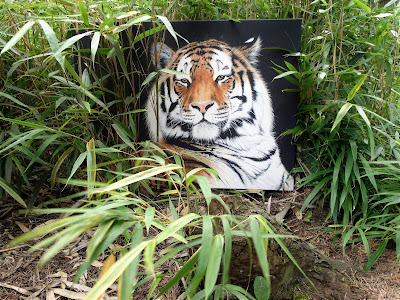