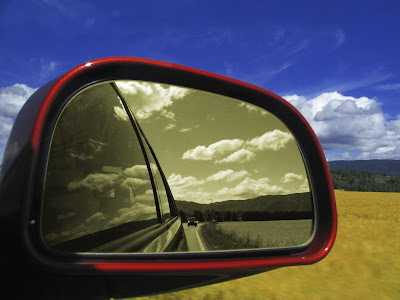 When one has been blogging for over eleven years, it can be interesting to look back in time in order to read posts that one created long ago. The experience can feel peculiar - as if one is reading someone else's blog. Did I really write that? Was that really me?

Obviously, the people who visit this blog nowadays are not the same people as those who came to this corner of the blogosphere in 2005 and 2006. Time marches on and the scenery changes. People come and people go.

With those thoughts in mind, this post is a little window on the past - an act of revisitation that I wish to share with current visitors. Rather randomly, I am about to share five blogposts from past years with little contextual introductions. I hope you find this historical excursion interesting. You will need to click on the links.

October 7th 2005. It was the day before my fifty second birthday and I had been blogging for just over three months. I thought it was about time that I told international visitors about my adopted city - Sheffield in the far south of Yorkshire. Unsurprisingly, I called that post Sheffield.

September 13th 2007. It was the day of my mother's death at the age of eighty six. Her passing was not unexpected as she had been deteriorating rapidly in the old folks' home where she lived for the last two years of her life. She was a powerful influence in my life - a strong, independent and emotional woman who possessed many talents and loved life to the full. There is a sense in which she has not "gone" at all but the post I wrote that day was titled Gone.

November 15th 2009. A lot happened in 2009. That was the year I decided to jump off the top diving board and take early retirement from teaching. It was also the year that I fulfilled an ambition I had harboured for many years - to visit Rapa Nui, otherwise known as Easter Island. To me it is an amazing place. I made a couple of blogposts while I was on the island and this was one of them - I called it Mecca.

March 25th 2011. That was the year I visited Thailand for the first time. I spent six months teaching at St Stephen's International School in northern Bangkok. It was a wonderful, healing experience. I also got to travel around to northern Thailand, Malaysia, Laos and Cambodia. Shirley came over at Eastertime and we went to Koh Chang and one of the old capitals of Siam - Ayutthaya. The post I have chosen to share describes Buddhist new year celebrations in the school.  It's titled Songkran.

August 4th 2013. One of the nicest things about managing your own blog is that you can make posts about anything that catches your fancy, There's no editor or governing body vetoing the content. On this day back in 2013, I decided to write about what was once the most remote inhabited island in the British Isles - the main island in the St Kilda archipelago - Hirta.

Those five randomly chosen posts from the past give just a glimpse into the history of this blog. There's so much I have left out. No poems. No long country walks. No rants or recipes. In these past eleven years I have made 2125 blogposts. It has been a long journey. Perhaps I shall repeat this exercise in looking back another day.
- September 09, 2016