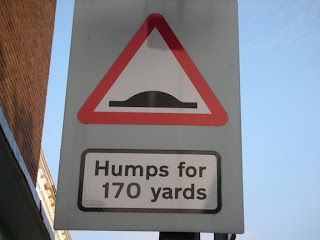 Humps or bumps or sleeping policemen? I don't care what label you give them but I hate them. From time to time, it's healthy to have a good rant and speed humps are very rantworthy - if there is such a word.
It's amazing when you start scouring the internet just how much strong feeling there is out there about the humps. Far from being a traffic calming measure they are a source of much annoyance amongst drivers up and down this country. Until writing this post, I hadn't realised that speed bumps often cause actual physical pain to people with back complaints or those who have recently had surgery in hospitals. I had also failed to recognise that the braking and acceleration associated with speed bumps creates extra noxious gas pollution. That's just two powerful arguments against the damned things.
Let's go back in time - about ten years ago. In my home city - Sheffield - there wasn't a single speed bump - apart from those on hospital property. Then somebody at the council thought it would be a good idea to randomly introduce them on nearby Rustlings Road just by Endcliffe Park. Why there and nowhere else is an unanswerable question. Rustlings Road is an ordinary city street and in the twenty years I have lived nearby I can't recall one single occasion when a pedestrian was reportedly knocked down upon it by a speeding vehicle.
Those speed bumps led to a humping industry where teams of road workers would seemingly randomly dig up roads and with no consultation with local residents create the dreaded humps. Sometimes the humps would be in red tarmac, sometimes in black/grey. Sometimes they'd be continuous humps and sometimes intermittent, individual humps. Between these devilish mounds they would sometimes leave a foot, sometimes a metre. The distance between them like the height is variable - with apparently no regulatory dimensions.
When we had a Ford Focus, I could whizz over these individual mounds without much of a bump at all. Like many drivers, I found myself concentrating more on how to drive over the speed bumps than upon more important traffic issues such as who was behind me and who was in front or whether or not there were children playing at the roadside. However, in Shirley's environmentally-sound little Nissan Micra with its narrow wheelbase, there is no way you can whizz over the speed bumps. In a thirty mile an hour zone, you have to literally get down to 15mph in order to avoid damage caused by the jolting that each speed bump creates. This can be frustrating for following drivers in bigger cars who probably don't understand that each speed bump is like a hazard to be negotiated when you are driving in a small car.
Why do some roads have them while others don't? How much does the speed bump tarmac have to crumble before it is repaired? Why do councils make driving even more difficult by creating costly one way "chicaines" at random points on humped roads? How do they decide to have continuous or broken humps? How many lives have been saved by speed humps and more significantly how many lives have been lost because of them? How much damage do speed bumps cause to cars each week and in the longer term?
Send £50 (or $80US) to Mr Y.Pudding if you wish to join the "BASH" organisation - Bloggers Against Speed Humps. Direct action will be important in our campaign so please ensure you have a pick axe, a pneumatic drill or a stick of semtex handy and wait for further instructions from BASH command.