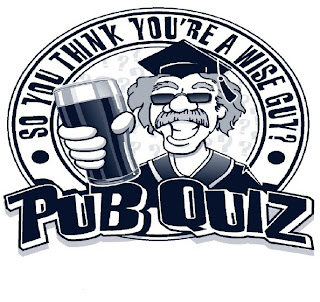 There's something about growing older that requires one's life to have more predictability, more routine and less randomness. Hence in my life, Monday is when we make spaghetti bolognaise for our evening meal with mushrooms cooked separately in butter and oil, a sprinkling of fresh parmesan and warm bread rolls. I always wash mine down with half a pint of milk - the only time in the week when I ever drink it.

"EastEnders" comes on at eight o'clock during which time nobody is allowed to call me and if they do I am most definitely "out". At twenty past nine, it's time to wander up to one of our locals - "The Prince of Wales" where Monday is the "Fun Fortunes" quiz night. I meet up with two Michaels as I have done for the past twelve years. There's Mick the former warehouseman who lives with his aged mother in a surburban semi that is little different from ours and there's Mike the folk singing English teacher exiled from Oldham which, rumour has it, exists in that strange world called Lancashire over the Pennine hills.
We have a good laugh and a natter, arguing the toss over the quiz questions and enjoy a bit of banter with the bar staff and other regulars like the gang from "The Grouse Inn", the dentist and his wife, Clive, Ian and Anne, Gordon and Wendy. Familiar faces. Lecherously, the two Michaels will often ogle shapely local beauties sidling up to the bar which is a tendency I find quite offensive - I mean some of those young ladies are old enough to be their daughters!
Over the years we have done quite well on the "Fun Fortunes" quiz, many times winning the top prize of eight beer tokens and often winning four tokens for the best team name. Mike came up with tonight's name -
"Well Christmas day has been and gone
And memories are growing murky
But can someone please tell me what to do
With all this bleeding turkey!"
Four tokens in the bag worth at least £10.
A typical question in the quiz would be - "Give the names of five world leaders who were considered evil". There are two marks for the top answer which was of course Adolf Hitler and one mark for the next four answers - giving a maximum total of six points. After Hitler you think Mussolini, Margaret Thatcher, Saddam Hussein, Pol Pot, Idi Amin, Robert Mugabe, George W. Bush and you decide the best four.
Trouble is nowadays you see some quiz teams using mobile phones, texting, accessing the net to gather their answers. It never seems quite fair. But in spite of that threat, Mick, Mike and Mr Pudding regularly come out on top and have the last laugh. It's a good feeling when the landlady Becky or her assistant Abby count down possible quiz scores - "Has anybody got forty five or higher? No? Forty four? Forty three? Forty two?" and we yell "Yep! Over here love!" for the umpteenth time.
Tonight I wandered homewards with William, our next door neighbours' son, who is in his late thirties and gradually recovering from a major brain operation. The pavements were still slippery with the icy remains of last week's snow and a Sherlock Holmes mist had descended over our prosperous Sheffield suburb. Same again next Monday - how very comforting.
- December 29, 2009