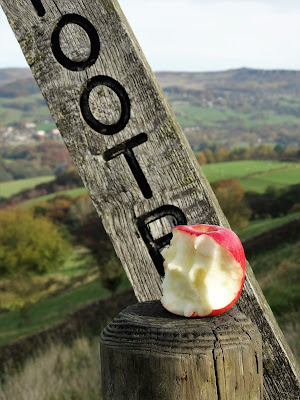 For several weeks my left knee has been playing me up. I don't recall a particular incident but gradually the discomfort built up till I was limping and I couldn't undertake long rambles in the countryside any more. Short walks were okay but I felt every step in my knee joint. The idea of not plodding for miles on end any more made me feel downhearted because this is one of my greatest joys.

Anyway, patience can sometimes bring us happy rewards. The pain and discomfort have been in recession over the last couple of weeks and the piratical limping gradually melted away. Yesterday, I felt it was time to test out the left knee rather more and planned a five mile walk in familiar countryside to the south west of Sheffield.

It was a beautiful day. The weather was so unseasonably mild that I decided not to bother with my fleece jacket. I parked near Highlow Hall on the lane that leads to the delightful hamlet of Abney. Then I set off towards Callow Farm and Offerton, passing Robin Hoods Stoop - an ancient wayside marker stone.
It was delightful to be marching along in the autumn sunshine with my little map, a Pink Lady apple and of course my trusty camera. But more than this, after all these weeks to feel no pain in my knee. No messages being transmitted to my brain with every footstep. It was like having an iron shackle removed.

Majestic seventeenth century Offerton Hall nestles on the slopes of The Hope Valley. Along from there, you see the ruins of an old farm at Banktop. Then it's up Shatton Lane to the telecommunications mast on Shatton Moor. Along to Offerton Moor and Smelting Hill, looking down on Abney and then continuing to Oaks Farm where a rabid dog came yelping with bared teeth as if I was the devil himself. Fortunately, there was a gate between us.
And so onward by Oaks Wood and Mill Wood where frisky American grey squirrels were seeking nuts for the winter. Ahead of me, Highlow Hall - another seventeenth century manor house which, according to legend, is haunted not by The Pink Lady but The White Lady. An appropriate ending for Halloween... and twenty four hours later I am pleased to report that the knee still feels good.
- November 01, 2016