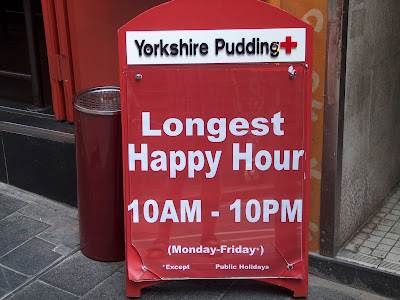 So there we were riding up the "Mid Levels Escalator" which takes workers and tourists alike up the steep hill from "Central" Hong Kong towards "The Peak" that towers above this skyscraping city. We were heading for Hollywood Road and SoHo for an evening meal. Approaching Staunton Street, I was momentarily speechless. Like Fred Flintstone, I dragged my Wilma off the mechanical pavement and twisted her head to gaze upon something I had never expected to see - a bar/restaurant called not "The Hong Kong Fooey" but named after me - yes me - "Yorkshire Pudding". There was a Rolls Royce pulled up outside. Then I remembered - to avoid carting my backpack around - I had left my camera back at the hotel. Typical! But wait a minute - no problem - Shirley could use her mobile to photograph this temple erected in my honour. "I left it charging at the hotel," she trembled - fearing my manly wrath.

Next day, after scaling the Bank of China Tower and the International Finance Centre Tower - not like Spiderman but in high-speed elevators - and after exploring "The Peak", we found ourselves back at"Central" with time to spare. Naturally, we re-ascended the human conveyor belt and again reached Staunton Street. I rubbed my eyes. It had not been a dream. It really existed - a bar/restaurant called "Yorkshire Pudding".
With trepidation, we entered the establishment and ordered coffees. It felt strange being inside myself. We sat at the bar but to our right there was some kind of interview going on with a photographer in attendance. The lady being interviewed was Rosemary Torrance, marketing manager for the Staunton Group of businesses. Apparently, my bar had only opened three months ago and the local press were interested.
Rosemary was delighted that two random tourists had wandered in in the late afternoon and even more delighted when I told her I was not only from Yorkshire but that I was the real "Yorkshire Pudding". I also spoke with the Chinese journalist, Li Ming Kit. Next and quite bizarrely I had to tuck into an illustrative meal of Yorkshire Pudding with beef, roast potatoes and veg whilst supping on a free pint of Murphy's Stout. Shirley had "Spitfire". I tried to point out that Marston's "Black Sheep" would have been more appropriate but it was too late - the photos had already been taken and next week I am due to make my debut in a Chinese language newspaper. Have any other bloggers got bars named after them? I think "The Rhymes With Plague" would surely be too sophisticated for most redneck citizens of Georgia while "The Last Visible Dog" would be famous for its delicious roast kiwis and accommodating sheilas...
By the way, the little red cross does not indicate a first aid centre - it is in fact the cross of St George. I have instructed Rosemary to change this to a beautiful white Yorkshire rose. Far more appropriate. If visiting Hong Kong, ladies are required to use the front entrance. No gentlemen will be allowed in through the back. Sorry Mr Clewley! 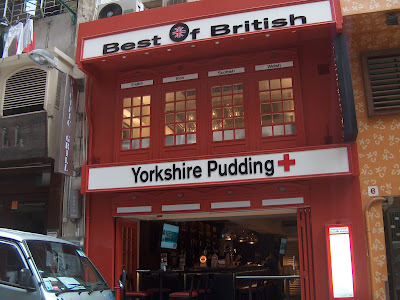