Oh, woe is me! Today I have been experiencing the first hangover I have had in many's the long year. Of course, it's my own stupid fault.
Yesterday began well. A lie in and then down to the residence's little tropical garden where I had breakfast by the pool whilst reading "The Bangkok Post". The owner of the place - "Staborn" - speaks English better than any other Thai I have met - probably because he spent years working abroad for the national tourist board. We chatted for a while. Later I hailed a taxi bound for Chatuchak Weekend Market - a vast, sprawling market with hundreds of stalls selling just about everything under the sun. I bought three things - a bag for my laundry, lunch and a model tuk-tuk made from a Singha beer can. The young woman who made these ornaments told me it took around three hours to make one and watching her work, I could well believe this. My little tuk tuk cost me just over £3. 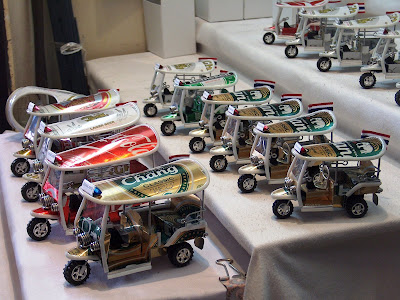 I wandered through nearby Chatuchak Park and managed to capture this image of a Finlayson's or Variable squirrel - unique to South East Asia:- 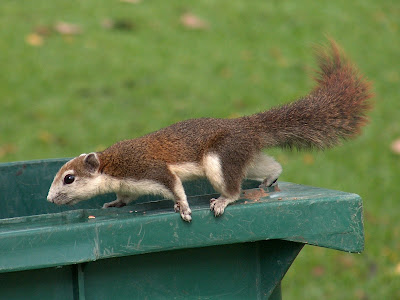 Bangkokians were relaxing by the lake:- 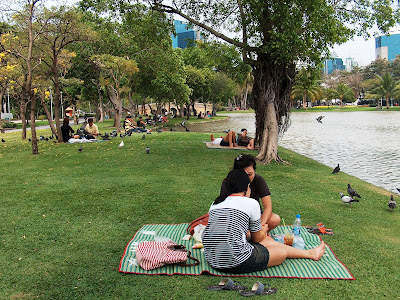 Then I wandered through Union Mall with its throng of young shoppers pursuing their unfathomable clothes hunting hobby and onwards to my appointment at the dentist's torture chamber which I left after an hour minus the root of my previously crowned front tooth and about £100 which I had to pay for a brand new dental plate. Fingers crossed, it feels very comfortable.
Back at my room I contacted Jon's wife - Denise - to check on arrangements for the evening. We caught a cab together, then the Skytrain, finally arriving at an English pub called "The Bull's Head" - filled with ex-pats. I had my first beer at 8pm. At midnight I was watching the England v France rugby international live from Twickenham and fool that I am, I know I should have made my way home straight after the final whistle. But there was more beer and then a short walk to a late night bar where I played pool exceedingly badly. Finally, at 4am, I decided I had just had enough. With help from one of the other teachers at my school, I caught a taxi back to north Bangkok and remember, very vaguely, staggering homewards across a footbridge, putting my key in the lock and collapsing into bed.
Never again. Today has been a bit of a write off with the keyword being "recovery"...
- February 27, 2011