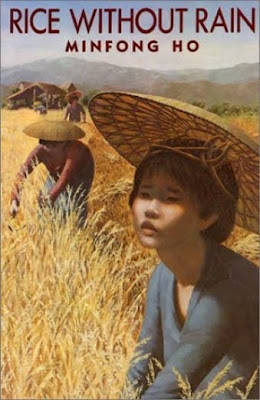 As I was sitting at the computer in my air-conditioned classroom at 7.30am this very morning a smiling student knocked on my door and came in solely to give me a sweet. Later, I announced to my Year 9 class (fourteen year olds) that I wanted their exercise books in, their copies of "Rice Without Rain" by the Thai writer Mingfong Ho and that they were to put their chairs under their desks tidily. Moments later, after they had gone, I looked across the room and saw that all chairs had indeed been put under the desks and on the front tables there were two neat piles - exercise books and novels. I didn't have to try. It just happened.
In contrast, I remember two horrid fifteen year old boys I taught in my last full year of secondary school teaching in north Sheffield. Martin and Louis were always late for lessons. Every time I challenged them they became surly and obstreperous, snarling back: "Nobody else bothers if we're late" or "What ye going on abaht?" or "We're only five minutes late - ger over it!". Louis never had a pen to write with. Getting work out of him was like getting blood out of a stone and his arrogant chum Martin was not much better. Their body language spoke volumes - rocking on their chairs, failing to sustain polite eye contact. I wrote to their parents, kept them back for detentions, reported them to the Senior Learning Mentor - all to no avail. Both of these boys had plenty of latent ability but they had chosen not to nourish it.
I'm not saying that all secondary school children in working class urban areas of Britain are like Louis and Martin. Many youngsters remain polite, focussed, willing and grateful of the help you give them. But there is a boorish and influential core of reluctant, argumentative and downright lazy kids who seem to do their best to turn education into drudgery. It should be happy, enlightening, pleasant. Being in Thailand reminds me that it really can be that way - adults and young people working together in an atmosphere of mutual respect, feeling a sense of joy about the very human business of learning.
- February 23, 2011