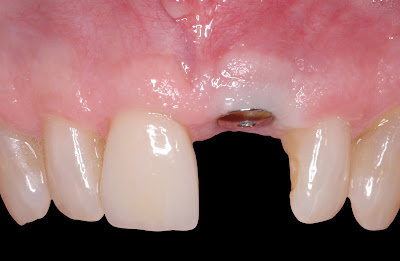 When I was fourteen, I was keeping wicket during a school cricket match. The bowler was a natural athlete called John Hawley who later went on to play football professionally for Hull City, Leeds, Arsenal and Bradford City. Anyway, the batsman moved across the line of the advancing ball which must have hit a divot and therefore rose at an unexpected trajectory. My gloves were too low and the ball hit me square in the mouth. My front teeth were broken and my cricket whites were bloodied.
The legacy of that moment has been with me my whole life through. One of the teeth that was saved had lost its nerve and as years passed it darkened so that I became quite self-conscious about my smile, often consciously hiding my teeth. Anyway, about three years ago, a Polish dentist who I would gladly pay to have hunted down by hired hitmen, persuaded me to have the darkening tooth crowned. Foolishly, I trusted in her professional expertise.
She made a pig's ear of it so that a few months ago my new NHS dentist said that the "crown" she had fitted would have to go and an attempt would be made to fit a new one. But this new one kept coming out. I returned to the dentist several times to have it re-cemented. In the end a third crown was made and fitted just before I came to Thailand. However, last week, probably while snorkelling, the third crown loosened and I ended up marching in to a Thai dental surgery.
Amazingly I got an appointment that very day. The Thai dentist a Dr Chalermpong Tungvijtsakun DDS (Chiangmai University) investigated my dilemma and deduced that the crown was not going to work out as the receiving root was fractured. I would need a false tooth adding to my front plate and the remaining root would have to be extracted. In the meantime, he temporarily glued the old crown back in and told me to be careful with it when eating. A new appointment was fixed for this Saturday.
On Monday lunchtime - my first full teaching day at the international school - the damned tooth came out again. I popped it back in in the men's lavatory. I had a class in the afternoon - twenty one bright fourteen year olds. My first announcement to them was that I was having a problem with a front tooth and they were not to be too surprised if it dropped out. On cue, the thing came out again. The children giggled but it was not in a mocking, nasty, uncaring teenage manner. They were very kind and forgiving about it and I was able to continue straightaway with the lesson I had planned. Later I thanked them for their kindness and respect.
By the way, reflecting once again on bizarre Thai nicknames, there are two boys who sit next to each other in this class - the first is called Two and his deskmate is Ply. I kid you not. Another boy is called simply "P". Their kind reaction to my front tooth issue gave me the confidence to march to school today with a toothy gap that I didn't give a damn about. It probably gives me Tysonesque street cred. Grrr!
- February 22, 2011