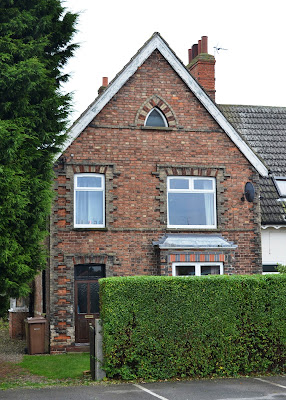 That night a bright star shone and three Hell's Angels came from the east on motorbikes. It is the house where I was born many years ago - in the  bedroom to the right. In those days, it was very common for country women to give birth at home, attended perhaps by the district nurse or the local GP. It certainly wasn't some kind of lifestyle choice. Besides, though the modern western world has turned birthing and midwifery into pseudo-sciences, human history has demonstrated a less anxious view of childbirth. It's just one of those things. Like shelling peas.

I lived in that house for the first seventeen years of my life but have never been inside it since. Little nicks were made on a wooden door jamb to plot growth spurts and there was an old wash-house where I kept my pet mice. Next to that was the coalhouse where we stored both anthracite and coke. There was no central heating.

It was the village schoolhouse and one day when some men came to replace floorboards in our sitting room, as well as discovering an enormous puffball fungus, we also found a stack of Victorian slates and pencil-thin chalks that had been  used in the old school during the nineteenth century.

Even as a child of three, I would wander into the school next door and affix myself to which ever class I chose. I became the school's little mascot - carried on big boys' shoulders or bounced on big girls' knees. The school was just an extension of my home. I appear in several formal school photographs sitting amongst the big kids.

An old fashioned black bakelite telephone sat on the window sill of our dining room next to the kitchen. It was there on the day I was born and it was still there the day we departed - seventeen years later - still working perfectly well - but by then you no longer had to go through telephone operators in nearby Hull. The world had moved on.

I have so many memories of that house. Dad in his pyjamas blasting noisy rooks with a shotgun he had borrowed from a local farmer. Mum forever sewing beneath her sidelight. The coldness of linoleum in wintertime when you swung your feet out of bed. Paul dissecting a dogfish in the box room. Father Christmas leaving wonderful parcels in the dead of night. Simon and I drinking several bottles of "Babycham" when I was nine and he was seven - getting secretly inebriated while our parents were out. Robin customising his Lambretta scooter in the garage. Me listening to Bob Dylan, Cream and Led Zeppelin for the first time. Amy Spicer polishing mum's brass and silver ornaments. A gipsy selling clothes pegs from a basket. Oscar's kittens. So many memories.

I was going to include one or two other photos with this post but after seven and a half years of blogging it appears that my Picasa photo allowance has been used up and if I want to increase my storage I must pay the Google god money or delete old photos - which I is what I did just to get the schoolhouse picture in at the top of this post. Has anybody else encountered this problem?
- November 22, 2012