" Bolsover Castle occupies the hilltop site of a medieval fortress built by the Peveril family. The wealthy Sir Charles Cavendish - who already owned several other great mansions, including one only a few miles away - bought the old fortress in 1612 and began work on his Little Castle project.


William also added the vast and stately Terrace Range overlooking the Vale of Scarsdale, now a dramatic roofless shell. To show off his achievement, in 1634 he invited King Charles I and his court to "Love's Welcome to Bolsover", a masque specially written by Ben Jonson for performance in the Fountain Garden. Finally he constructed the cavernous Riding House with its magnificent roof and viewing galleries, among the finest surviving indoor riding schools in the country and a landmark in British equestrianism: here he indulged his passion for training great horses in stately dressage.

The Venus Fountain, with 23 new statues, plays again for the first time in centuries, and the 'Caesar paintings' commissioned by Cavendish and depicting Roman emperors and empresses have also returned to Bolsover." - English Heritage Description

As Sunday was scheduled to be sunny, Shirley and I set off early for Bolsover - a little Derbyshire town we had never visited before. It lies about seven miles east of Chesterfield on the other side of the M1 motorway and was once well-known as a centre for coal mining. But the pits have all closed and evidence of that dirty industry is hard to find.

Before setting off on the five mile walk I had planned out of the town, we visited Bolsover Castle and we were pleased to find that only a dozen other visitors had bought tickets so as we explored the site with its amazing "Little Castle" we could do so in peace without being jostled or distracted.

The castle's location is quite spectacular and to see it on a blue sky November morning was marvellous. Below you can see just a sample of my photos. Top row - oak roof construction in The Riding Range & view from The Terrace Range. Second row - cross-shaped aperture in the castle wall & "The Little Castle". Third row - Ceiling of the Elysium Room & bench in north western corner. Bottom - Shirley in the enclosed garden of "The Little Castle". 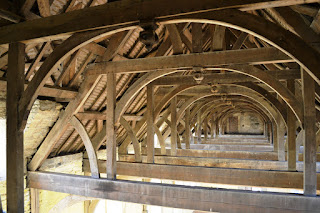 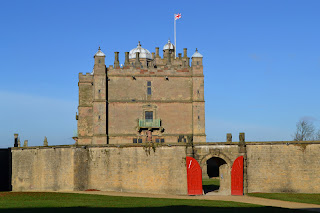 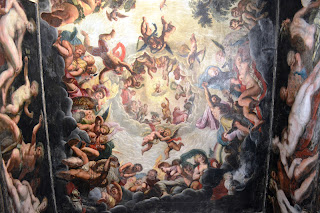