Phew! I have finally finished reading "Fordlandia" by Greg Grandin - having first got it out of the local library in September. It is a very well-researched book - complete with footnotes, extensive chapter notes and a fourteen page index.

At the most obvious level it is all about Henry Ford's most outrageous pet scheme - to develop a huge rubber plantation in the Amazon basin in order to avoid reliance on rubber supplies from southern Asia which were, in the first decades of the twentieth century, controlled by certain Dutch and British monopolies. Ford didn't like to be beholden to anyone and that is why, from 1925 onwards, he pumped millions of dollars into developing the Tapajos river site that his company had acquired cunningly and rather too cheaply from the Brazilian government. 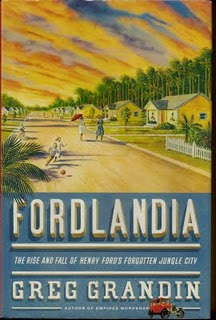 But this wasn't just about rubber, Ford seemed intent on bringing something of small town Michigan, to the temperamental Amazon jungle. There would be clapboard houses with neat gardens for the workers, company stores, a well-equipped hospital, a golf course, schools, modern sewage and water piping and a powerhouse to produce reliable electricity. Just as Ford had tamed the wildwoods of Michigan and engineered the enormous successes of the Ford Motor Company, so he believed he could tame the jungle - almost by force of will.

He hadn't counted on the caterpillars, the leaf blight, the indifference of Brazilian workers, the lies and the graft of some of his key managers, the pilfering, tropical diseases,  poisonous snakes, flood seasons or transport difficulties. It was an expensive experiment that was ultimately doomed to failure. As each corner was turned, new problems were encountered. So by November 1945 the game was up and the Ford Company finally abandoned their Amazon site. In twenty years, hardly any rubber had been produced. The abysmal failure of the project speaks of arrogance, ignorance and lack of careful planning. What was meant to be the fulfilment of a dream, and a living statement about the force of American capitalism, became a blot on Henry Ford's glistening reputation. Demented, he died in 1947 without ever visiting Fordlandia.

So Greg Grandin wasn't  just writing about a failed rubber plantation. His book's also about the nature of the American Dream, the death of omnipotence and the ongoing tragedy of modern man's relationship with the rainforest. It's a horror story that continues to this day and Henry Ford's laughable scheme was just a chapter in its tragic plot.

Walt Disney, one of Henry Ford's best friends, sponsored the production of a short film about Fordlandia called "The Amazon Awakens" in 1944. Only a year later the entire project was ditched though the rosy propagandist Disney  film gives absolutely no inkling of what was about to happen:-
- November 19, 2012