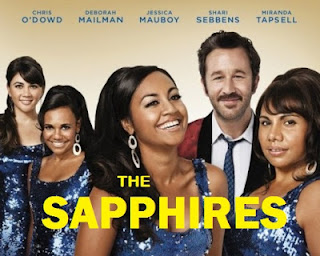 It takes forty five minutes to march from our house to "The Showroom" cinema in the city centre. So this pale November morning I set off just after ten o'clock for the 11am over 55's showing of an Australian film called "The Sapphires". Not only did I get to see the film at a bargain basement price, I also received a free coffee and a piece of fruitcake.

The film reminded me of "The Commitments" and was equally pleasant as light entertainment. If you were going to pigeonhole it you might say that "The Sapphires" is a musical comedy, loosely based on the true story of an aboriginal singing group that entertained troops in Vietnam in the early nineteen seventies. If you're looking for gritty realism or a meaningful cinematic post mortem on the degradations heaped upon aboriginal Australians then you won't find it here. Instead, you'll find some tears and some laughter in a "feel good" movie that is interspersed with some of the classics of soul music.

Directed by Wayne Blair, "The Sapphires", released in August 2012, was genuinely entertaining and left a pleasant glow behind in the auditorium. As Betty said to three other grey-haired ladies in the carpeted foyer afterwards, "Did you enjoy that?" and they all smiled, replying "Yes", "Good fillm that one" etc.. I think Wayne Blair, his crew and the actors would have been delighted with such a positive reaction. Sometimes you don't want to see films that brand themselves deep into your memory - sometimes you just want to be entertained.
- November 15, 2012