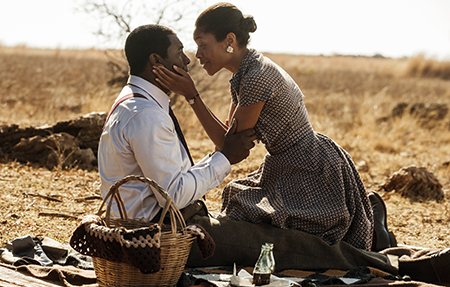 Cinema 4 at "The Showroom" in Sheffield's city centre was packed yesterday morning to see the over-55s screening of "Mandela - Long Walk to Freedom". You may recall that during the London preview of this film on December 5th, news broke that Mr Mandela had died. Prince William and his wife The Duchess of Cambridge were in that audience and the earlier red carpet ceremonies had been attended by Nelson and Winnie's two daughters - Zindzi and Zenani. A spooky co-incidence.

So - to the film itself. It did its job. It told the wide-arching story of Nelson Mandela's struggle and covered many of the key moments in his life. I must be a soft so-and-so because I must admit that there were moments when I wept - such as the day that Zindzi finally got to see her father at his prison on Robben Island and the bright afternoon in 1990 that he walked out of Victor Verser Prison, a free man ready to lead his people. Yes the film did its job and told Madiba's remarkable story very well. It is a story with which we are of course all familiar - a parable of our times.

Before seeing the film, I was aware of the many plaudits that the main actor - Idris Elbe has received. Now I don't wish to be churlish but I felt that his portrayal of Mandela wasn't entirely convincing. Elbe is a healthy, strong physical specimen and someone who is used to playing tough guys but Mandela needed more vulnerability, more dignity, more twinkle-eyed humour in my humble opinion. I felt that Morgan Freeman  got much closer to that in the rugby film "Invictus" (2009). Naomie Harris as Winnie Mandela was excellent - demonstrating that wine doesn't always mature well with age.The loveliness of youth turned to bitter vindictiveness during Mandela's twenty seven years in jail. Harris showed this well.

Surprisingly, Mandela once said that he had enjoyed his incarceration. He had felt like a monk, with plenty of time to reflect, to work out his ideas and in a curious way he had enjoyed the simple harshness of prison life. Elbe and his director - Justin Chadwick - failed to convey with conviction that intricate sense of how things were for him. So "Mandela - Long Walk to Freedom"  had its flaws but in the end it is a damned good film and seeing it is another way of saying goodbye to a very remarkable human being - a man who lived in our times.
- January 17, 2014