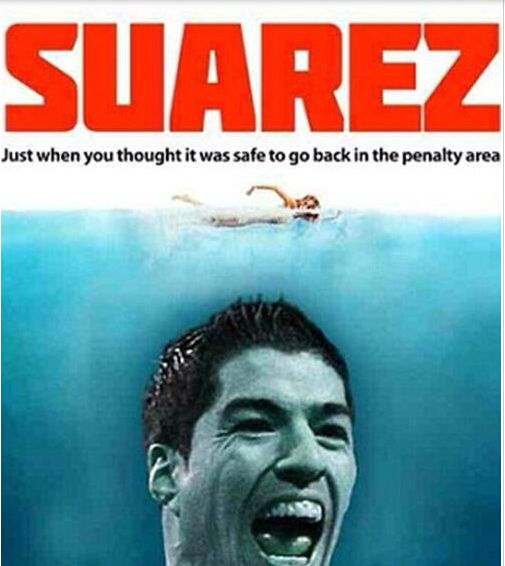 Luis Suarez is an exceptionally gifted footballer. Single handedly he effectively put England out of The World Cup - such is the deadliness of his goalscoring talent. As one of the world's top strikers, he is naturally given a hard time by any defenders he encounters. They try to out-muscle him and they intimidate him. There are largely unwitnessed elbows, shoves, kicks and provocative words. He has to be very strong to cope with all of this.

Against Italy the other day, Suarez bit the shoulder of Girorgio Chiellini. I have no doubt that this happened in spite of what Suarez or his Uruguayan team-mates might say. It was as clear as day - he bit him! No doubt Suarez had been provoked by the defender but of course, such reactive behaviour on a sports field is very reprehensible.

But let's not get this out of proportion. Players can be deliberately kicked, punched, spat at, sworn at. elbowed, tackles can be deliberately mistimed to cause maximum hurt and in the penalty area defensive antics can be very unsavoury to say the least. Yet Suarez - finding a defender's shoulder in front of him - chows down in an unplanned moment of frustration and he is pilloried by the world press as if he had shot the guy or knifed him in the back.What's so bad about a bite when compared with a bad tackle or an elbow in the face?

Don't get me wrong - I am not forgiving Suarez. He deserves to be banned from the rest of the tournament but many are calling for a lengthy ban from all footballing competitions for perhaps two years. This would be over the top in my humble opinion. On the BBC website the latest is "Uruguay support Suarez as FIFA verdict looms". Why FIFA are taking so long over this matter is a mystery but they are after all a bunch of incompetent freeloaders so maybe we shouldn't be too surprised. They are probably waiting for backhanders from some Uruguayan millionaire, recalling what motivated them to give Qatar the World Cup in 2022.

If Suarez does receive a lengthy ban, he should consider launching a new minty toothpaste - "Try Suarez for stronger teeth!" or maybe get a part in a new vampire movie - "Fangs A Lot" starring Luis Suarez as The Gnasher.

STOP PRESS: FIFA have banned Suarez for four months. He will miss the rest of The World Cup and Liverpool's first nine games in The Premier League. When asked for a response, Suarez said, "Oh bugger!".
- June 26, 2014