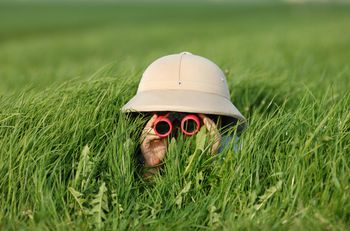 Of course, we were not alone in The Aminess Grand Azur Hotel in Croatia. There were around two hundred other guests there too plus a small army of staff. In the course of a week, many mental notes were gathered. I guess we are all people watchers.

There was a thirty something Croatian couple with two small boys. The mother was clearly pregnant a third time. At dinner or breakfast, the two little boys were a law unto themselves. They just would not remain seated at the family table. They wriggled down and ran around, getting under other guests' feet and yelling or laughing crazily. Eventually the mother would get up and herd them back to base while "daddy" continued eating, oblivious to it all.

One evening, the smallest boy seemed keen to investigate the coolers where desserts were displayed. Being only two feet tall he simply could not look in so rather cleverly he proceeded to shove a dining chair over there. Soon both boys were standing on it, looking in and they managed to grab some cakes before "mama" appeared to spoil their fun.

There was a German man with one of those hideous raspberry coloured birthmarks. It covered half of his face and was raised and pitted like the surface of the moon. The other half of his face appeared perfectly normal as did his pretty blonde wife. Another German woman - probably in her mid fifties -  was clearly recovering from a stroke that had affected all of her left side. She was slim and elegant but ambled around with much difficulty

Round the pool, flesh was of course exposed. There were several huge women with blubbery bodies shaped like barrels and a young fellow whose belly was so big that it wobbled right over his swimming shorts pulled up beneath. From the front, it looked as though he wasn't even wearing swimming shorts!

Every night in the far corner of the restaurant, a fifty something man sat on his own. He seemed perfectly content as he guzzled free beer and wine and  gobbled several towering  plates of food along with numerous desserts and pieces of fruit. Surprisingly, he wasn't especially fat. We referred to him as "The Axe Murderer" and after two hours his consumption would be halted by images on his smartphone which he beamed at with disturbing glee. It was an odd place to pick for a solo holiday.

Perhaps the strangest people of all were a sixty something English couple. The man dressed like a ragamuffin wearing a "Panama Beach" T-shirt, khaki shorts and worn out dusty sandals. In contrast, the woman was well-groomed and nicely dressed each evening. She picked away at salads while he sought to follow the dining habits of "The Axe Murderer". They seemed to spend much of their time observing other guests and as he lay by the pool I noticed that the grumpy old man was reading "Beloved" by Toni Morrison.
- September 16, 2019