Thanks to everybody who assisted me through the last blogspost. You read the three story openings and weighed them up, stating your preferences. I am most grateful. Beforehand, I had imagined that Number 1 would win the day but that was not the case. The majority of commenters were drawn to Number 3 and so that is the one I am going to enter in the competition.

Just a little more spit and polish and I will click the "Send" button. Later I will of course win the competition. A publisher will buy the rights to it. Steven Spielberg will hear about it  and before the end of next year I will see my name in the credits of an Oscar-nominated film that has already broken box office records around the world - "The Agony". Dreams can come true you know!
Meantime back in here in my reality, the weather has been unsettled this week. Yesterday, on television, I watched England beat the USA very convincingly at The Rugby World Cup tournament  in Japan. Afterwards, Clint took me over to the neighbouring suburb of Fulwood for a short walk in very familiar territory.
A woman with a shaggy dog told me that she had just spotted a grey heron. I expected the wary creature to fly off as soon as he spotted my camera but I managed to get one picture before that happened. Not the best photograph I have ever taken:- 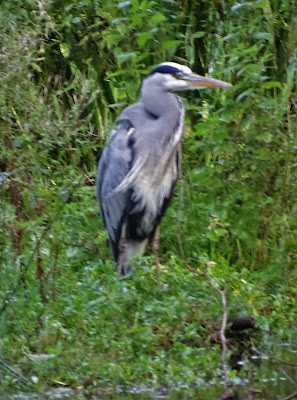 Back at home I  made my famous spaghetti sauce and left it bubbling on a very low heat for two hours. Such slow cooking softens the texture of the beef mince. I added a single fresh bay leaf from our garden, an "Oxo" cube, salt and pepper, crushed garlic and a little oregano.

Nurse Pudding came home at six and enjoyed her meal immensely. It was topped with butter fried mushrooms with a  hint of fresh tarragon and freshly grated parmesan. There was enough sauce left over for another meal, another day.
- September 27, 2019