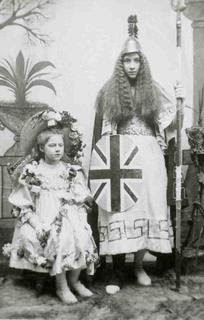 She was born in May 1921. Holding her little brother's hand, she made an apocryphal journey through grimy South Yorkshire streets to live at her grandmother's house because her own parents were, rather unusually for those days, breaking up. She married in India during the second World War then bore four healthy sons, living the life of a rural headmaster's wife. She is my mother and today she made another apocryphal journey - from the cottage hospital to the old folks home but this time I don't think she will be coming out. It's the start of the last chapter. She's eighty four with two strokes behind her, a broken hip, a broken collar bone, several unrecorded falls, several bottles of cheap whisky and brandy, lots of tales retold... And when they asked me at the home what her hobbies are, I thought of all the hobbies she once had - reading avidly, basket weaving, glove-making, lampshade making, caravanning, crosswords, knitting, singing, baking - a human dynamo.... but now there are just shadows of the woman she once was, sitting in her high chair like an old cowboy on his verandah - looking out across the plains.
- July 17, 2005