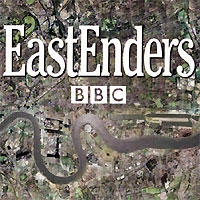 <- Click image for EastEnders website.
Finally, I have decided to come out of the closet to admit that I am a huge fan of the BBC soap EastEnders which explores life, love and tragedy in the fictional London borough of Walford. I have hardly missed a single episode since the show was first launched in February 1985. Smatarse critics who never watch the soap will often claim that it is "dour", "grim" or "morbid" - "No one ever laughs or smiles". This is all utter balderdash! Long ago, Shakespeare discovered that the best theatrical drama will emerge from life's trials and tribulations and not from those times when everything goes along quite swimmingly. I think the writers are generally good at mixing things up with Jim and Dot often seeming like Albert Square's answer to Andy Capp and Flo while The Millers echo Roald Dahl's "The Twits". This is a truly brilliant soap but you have to live with it week by week to really appreciate it as it moves between dramatic highpoints and bread and butter lows - necessary to meld the soap's ongoing major themes and issues together. I say - Stuff the Critics! Come on Walford! And thanks to the brilliant EastEnders team who have given me so much armchair pleasure these last twenty years!
- July 13, 2005