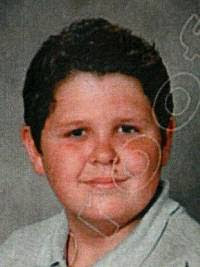 The schoolboy on the right is Ryan Parry. He died yesterday afternoon at the tender age of fourteen whilst investigating flood waters surging down the River Sheaf, just one of five normally tiny streams that run through Sheffield.
He wasn't the only one to die. An unnamed pensioner got out of his waterlogged car on The Wicker - close to Lady's Bridge over the River Don and got swept away by the flood waters. Regarding this man's death, a police spokesman said "The waters rose extremely quickly- the victim was with another man and the water level rose from ankle deep to chest deep. Soon both men were paddling and trying to pull themselves along the bridge wall. The victim got into difficulty and the other man tried to assist him but was not able to pull him from the flood. He got to the side and shouted for help. A member of the public managed to pull the by-then unconscious pensioner from the water a few minutes later. Members of the public then tried to resuscitate the man until paramedics arrived and took him to Northern General Hospital where he died. "
I have lived in Sheffield for thirty years and have never known a day like yesterday. The rain was torrential. Water was surging down our street like a river but we were safe because we live on a hillside, far above Endcliffe Park which is a mini-flood plain for the River Porter. Floods will never reach us even if both polar ice-caps melt entirely.
My school closed at lunchtime yesterday and today school was cancelled - no electricity and huge puddles around the entrances with so many staff living in badly flooded outlying areas. I put in some extra work at Ian's new house and all the time there were sirens outside and snarling traffic jams. It was like World War III had arrived. Puddles were forming in his cellar as rain trickled down the old coal chute.
Of course the floods of the last thirty six hours bring echoes back of another flood that happened in the city on March 11th 1864. This is often known as "The Forgotten Flood" - probably because it happened "Up North" where life was more dispensable. It is known that over 250 people were drowned in that flood when the Dale Dyke Dam on the edge of the city burst and sent water gushing down the Loxley Valley towards Malin Bridge and Hillsborough. Destruction included 415 dwelling houses, 106 factories/shops, 64 other buildings, 20 bridges and 4478 cottage/market gardens. Despite being one of the biggest man-made disasters in British history, and now being annually recorded in the Guinness Book of Records, few people today - even in Sheffield - know a deal, if anything at all, about the flood. 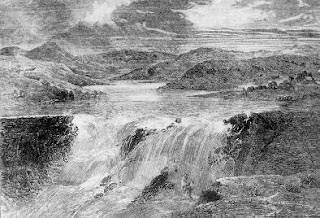 An artist's impression of what happened at Dale Dyke Dam on March 11th 1864.

This blog entry is dedicated to Ryan Parry, the unnamed pensioner and the forgotten victims of the Great Sheffield Flood of 1864. May they rest in peace.