Such lovely weather we've been having the last few days here in sunny Sheffield. On Sunday, Shirley and I thought we would blow away some of those wintry cobwebs with a vigorous walk around Stanage Edge - which is literally eight minutes west of our house. It has become amazingly popular with rock climbers who travel here from all over the country. Once parts of this "millstone edge" were quarried by hardy men who carved thousands of millstones for industry - such as the thriving steel industry that saw Sheffield grow from a fairly small village to a major city within the space of eighty years during the time of our amazing industrial revolution. Even today, like mysterious prehistoric messages, you can find the remnants of the millstone makers beneath the edge. I remembered to take my camera along:- 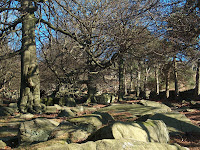 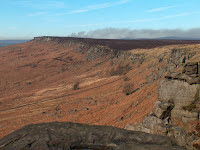 View along the northern part of the edge. 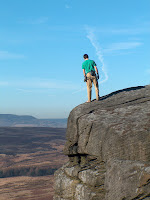 Rock climber wondering where his mate has gone. Aaaaaaaargh! SPLAT! 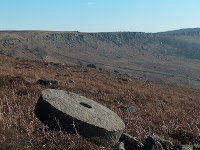 Abandoned millstone near an ancient quarry.