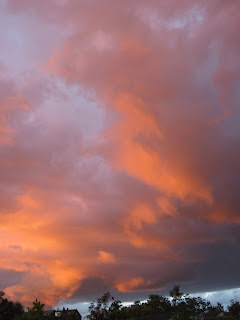 Mid to late June. Such a lovely time of year in the northern hemisphere - though last year this city I inhabit was struck by biblical style flooding around now. Not so this year. As the days and the weeks pass, it feels as if we are having a proper, sun-kissed summer - interspersed with acceptably short spells of wind and rain.

In Endcliffe Park, the annual travelling fair didn't have to call in tractors to drag their sodden vehicles out of the mud and behind the school where I toil, the earth that the construction team pile into mounds is as dry as coffee granules. Last year, a natural swimming pool complete with muddy brown waterfalls formed over the emerging foundations of our new school.
I love these summer skies, in a period when the darkness over Yorkshire lasts for little more than three hours a night. Every evening the sky is different - sometimes streaked with yellows, mauve, rose-pinks and gold but the sun rises so early I hardly ever see what's happening up there on the beautiful ever-changing natural canvas beneath which we mortals parade upon our ant heap of a planet. But just last weekend I greeted a summer 3.30 am dawn on the old bench at the bottom of our garden - mug of tea in hand and a rosy birdsinging glow from the east. Beautiful.
See the sky beneath which bats weave and flutter and crows flap to their evening roosts. See the never-to-be-repeated patterns of light and colour, shadow and cloud. The gradual dying of the day - over silhouettes of rooftops and sycamores - a promise of something finer, brighter far to the west. Human beings have always looked up there - to the stars, the clouds, the blueness and the grey - the sky - silent and perpetual witness to a billion zillion ridiculously brief lives. 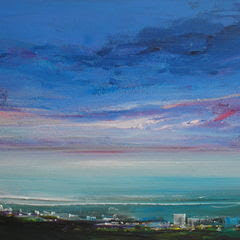