I threw back the bedroom curtains this morning to see an urban fox trotting across our lawn and up to the apple trees. I watched while he attempted to ambush a couple of blackbirds pecking at windfall apples that I had deliberately left lying around in late autumn to help visiting birds through wintertime.
Even though we live just three miles from Sheffield city centre, surrounded by roads and houses and a further two miles from the edge of the city, we frequently see foxes. A few weeks ago, returning from the pub, I eyeballed a fox down our street. He was perhaps no more than three metres from me. We stared at each other and very slowly I crouched down, put out my hand and said "Here foxy!" but of course he wouldn't come. He's not a lapdog - he's an urban fox. He was out scavenging for survival. Eyeing me curiously, he scurried off. 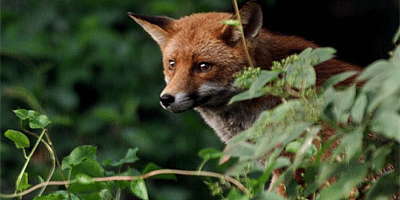 I kind of envy the lifestyle of urban foxes. They remind me of the gypsies who annually passed through the East Yorkshire village where I grew up. We would rush to the school gates to see them pass with their ragamuffin children, their clanging pots and pans and their ragged horses. Just like the urban fox, these people didn't really belong in our society. They were free spirits, living amongst us but ignoring the rules by which everybody else had to play. No rent. No permanance. No wage slavery or television news. Close but so far away and as cunning as foxes.

We had a couple of leftover pork chops in the fridge. I ventured up to the apple trees and left them on the old garden table as a gift to the fox god. Most likely they will have disappeared by tomorrow morning.