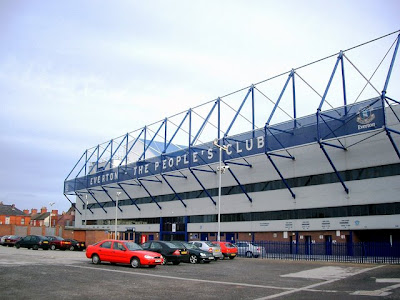 Everton - The People's Club
When I were nobbut a lad, I had two teams. There was my real team - Hull City, always languishing in the lower divisions, always providing more pain than joy, always rooted in the real world - and there was my "dream team" - the top flight team that could win cups, defeat the likes of Arsenal and Manchester United and be a home club for great international players - and this dream team was Everton. On my locker door at school I had two pictures sellotaped - one was of Hull City's tiger mascot which I painted myself when I should have been doing homework and the other was a photograph of the great Alan Ball (Everton and England).

Yesterday, I visited Everton's ancient Goodison Park stadium for the very first time to see Hull City play the mighty Toffees in the nation's top division. We caught the "Soccerbus" from Sandhills station. I saw the great bronze statue of legendary striker Dixie Dean just outside the ground before we entered the ancient stadium. My seat was in the Upper Bullens stand on the back row - seat S55. A bloody awful position even though the ticket cost me £34. My view of the pitch was slightly obscured by pillars and the cantilevered construction.

Everton won 2-0. Felliani's opening goal was clearly offside and the second - a brilliantly taken free kick by the Spaniard Arteta -should never have even been awarded by the Scouse referee who made a series of dodgy decisions in Everton's favour. Why did he keep listening to the protests and perpetual arguing of the Everton players? And why could he not see that there was a pattern to any physical challenges upon Everton players - fall over, writhe around for two minutes, get the free kick and then - miraculously get up as right as ninepence. Bloody actors! However, I must admit that The Tigers didn't really trouble keeper Tim Howard all game and we are now very much in the business of surviving.

Liverpool is home to 435,000 Scousers but in 1931 it had a population of 846,000 and was Britain's second city. You can see its past greatness in its architecture and in the character of Liverpudlian people. It was a bitterly cold day but after alighting from our Trans-Pennine train in Lime Street Station, we headed for the waterfront and the refurbished Albert Dock where we ate lunch at The Ha Ha! Bar (I wouldn't recommend it). It was frustrating not to have enough time to visit the Slavery Museum or the Walker Art Gallery or the shops in the latest retail development - Liverpool One. Perhaps we will have to come again.

We spoke to several Liverpudlians. What an amazing and unique accent they have! Of course, educated Liverpool people like Willy Russell or Phil Redmond have tempered their accents but speak to an ordinary working class Liverpudlian and what they say is verging on the unintelligible!

Excuse me. Can you tell me the way to Lime Street Station?
becomes
Ey yous. tinnie yous tell me de way ter limey statin?
And might be answered with:-
Yis ay tinnie. bowl up de brew. take a rite and it is juss in front o' yous. 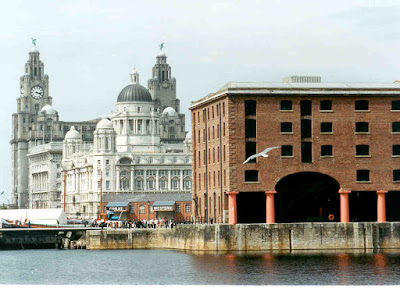