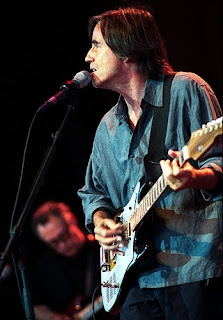 "Never heard of him". That's what my twenty six year old work colleague Emma said when I told her I was going to see Jackson Browne in concert last night. The venue was Sheffield's magnificent Oval Hall in the beautifully refurbished City Hall building in our city centre. Of course, I had heard of Jackson Browne. His songs first came into my life back in 1973 when my younger brother Simon lent me his first album - "Saturate Before Using". I have bought every other album since but only once before had I seen him in concert - in Nottingham five or six years ago.

This time, now sixty years old, Jackson Browne brought a band with him. It was a very tight band which skilfully enhanced the songs in a well-reherased set. There was Kevin McCormick on bass, Mark Goldenberg on guitars, Mauricius Lewak on drums and Jeff Young on keyboards and vocals. Back in 2001, Jackson met two black students at an LA high school concert and later drafted them into his musical circle as backing singers - Chavonne Morris and Alethea Mills. The overall sound quality at last night's concert was brilliant - balanced and clear with band members working together as a team with egos suppressed.

We were sitting on the front row - me and Simon. In A7 and A8. Supposedly the seats had a "restricted view"but I didn't notice any resrictions. It was great to be within twenty feet of the Southern Californian legend himself.

Jackson comes across as a pleasant, self-deprecating man with a healthy sense of humour but with a mission to deliver his repertoire as effectively as possible. He brought in songs from his new album "Time the Conqueror" but loudest applauses were for old favourites such as "Doctor My Eyes", "These Days", "The Pretender", "Fountain of Sorrow" and the foot-stomping "Running on Empty" which had most of the audience up out of their seats jigging to the music. After long and sustained hand clapping, wolf whistling and "More!" yelled from the auditorium, he returned to give us a smashing and heartfelt rendition of ""Before The Deluge". It was a really brilliant and uplifting concert.

As a wordsmith, a teacher of English and a lover of words, I have always found Jackson Browne's well-crafted lyrics particularly appealing. There is humour there, humility, anger, awareness of beauty, metaphor, memory, political protest and tenderness. His voice has a resonance to it which is plaintive and true, giving oxygen to words which perhaps when seen as mere text lose some of their poetic power. It is arguably only when they're linked with the writer's voice and his tunes that they get up and grab you.

I love the opening of "The Pretender" which seems to me to be partly about the heroism of ordinary working people living their unremarkable routine lives - "I'm going to rent myself a house/ In the shade of the freeway/I`m going to pack my lunch in the morning/ And go to work each day/ And when the evening rolls around/ I`ll go on home and lay my body down/ And when the morning light comes streaming in/ I`ll get up and do it again/ Amen/ Say it again/ Amen" Here he was in Seattle last September:-


Thank you for visiting Sheffield Mr Browne. But next time come round to our house for a cup of tea.