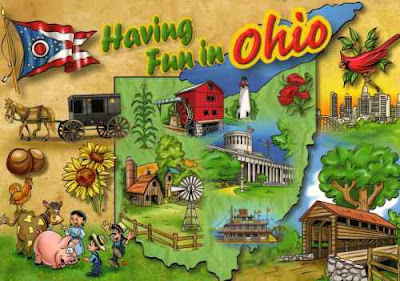 I always think of Ohio as bedrock America. It sits four hundred miles west of New York City, beyond the Appalachian chain and south of Lake Erie. It's not a state that tourists would automatically flock to. Ohio is a hard-working state of blue collar workers and busy families but it has also produced no less than seven presidents. They call it The Buckeye State after the American buckeye trees that grow there producing buckeye nuts that are rather like Europe's conkers.

In 1800, only 45,000 people lived in Ohio, now there are eleven and a half million. The biggest city is Cleveland with a metro population of some 2.25 million. Many of the original white settlers were of Germanic origin and you just have to scan surnames in a phone book to see that the Germanic links remain. In Ohio, there are no less than eighty eight counties. Just as the state itself is like a separate country within the USA, so within the state these counties have their own identities and regulations and Ohioans can be fiercely loyal to their counties.
The two counties I know best are Cuyahoga and Mahoning. When I was a student, I thought - Christ, I can't work at Butlins again, nor the turkey farm or the agricultural chemicals factory - I'm going to apply for camp counselling with BUNAC (British Universities North America Club). My application was successful but you had no say at which camp you'd end up - it was all luck of the draw. I ended up in Cuyahoga County, Ohio at the now deceased Red Raider Summer Camp. It took in the sons and daughters of the well-heeled dwellers of Shaker Heights and other exclusive suburbs of Cleveland. Marvellously, it was also a day camp so the little darlings went home at four thirty making evenings and weekends free for the camp staff. I wasn't complaining.
I got to see the Cleveland Indians, Neil Diamond in concert, Barry Manilow. I went to parties and got invited back to palatial American homes. I played guitar and sang in a local club for twenty bucks and as much beer as I could drink and I became a regular at Skip and Ray's or Chuck and Janine's laughing the night away. I fell in love, fell out of love, camped out in the forest with my group of Wyandottes, ate well and relished every day. It was so good I can't tell you. I went there two years in succession.
Once a week we would travel east towards the Pennsylvania border through Ohio's Amish country. I never knew such people existed alongside the freeways and the supermarkets - a simple and rather enclosed religious community almost frozen in time. They would gather under the trees in Russell with their horses and traps, wide brimmed hats and beards, women and girls in austere long dresses and bonnets. It was so weird. We were going canoeing with our kids on an Amish farm which had a small boating lake. From the verandah of the Amish farmhouse, an old woman watched us suspiciously from a hundred and fifty years back. One Wednesday she gave me a glass of homemade lemonade. It was delicious. She had never met anybody from Europe before - but that was not uncommon in Ohio in the mid seventies.
I found so many people I met in Ohio to be very friendly and down to earth. They were in the true heart of America and the American dream wasn't only possible it was there within their reach. Once I borrowed Chris's Mustang - like you do - and I was moseying on down to Columbus or some place else one Sunday morning when I picked up a leather jacketed hitch-hiker of around 19/20. He was going to a moto-cross meet. After a few miles and some conversation he said, "Hey man you gotta strange accent. Where you from?"
"England."
He paused. "England?... Ain't that somewhere over near Maine?" 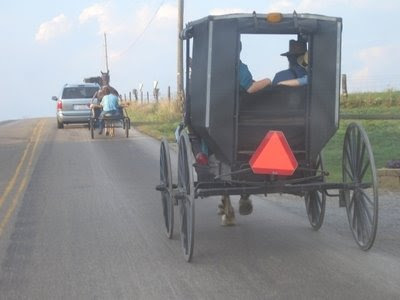