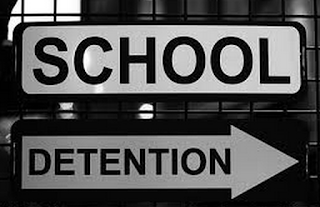 Schoolchildren will often misbehave. That misbehaviour invariably impedes or undermines education. Levels and types of misbehaviour are more significant in schools that serve disadvantaged communities. When you are at the frontline trying to deliver a decent education, there are very few sanctions you can call upon to squash the misbehaviour. Most of the time you rely upon your wit and the force of your personality.

As Head of English in the last Sheffield secondary school where I worked, I was responsible for managing the department's detention system. This had to comply with whole school policy on detentions. When I look back, it all seemed so bizarre and a monument to cock-eyed modern notions of fairness. Ultimately, the people who were punished most were not the juvenile miscreants but teachers like myself who'd been given the poisoned corporate chalice by a headteacher and deputies who tried to wash their hands of it all while they got on with their "strategic planning" like generals in a faraway bunker.

It worked like this. Pupil A - who we will call Bob - is persistently late for English lessons. Miss Brodie has warned Bob that if he doesn't improve his punctuality he will be placed on detention. Bob continues to arrive late, bursting into lessons after Miss Brodie has settled the class and explained the day's work.

Miss Brodie writes out a self-duplicating  pupil referral slip. One copy goes in English department files, another is sent to the Head of Year and another is sent to central school records. She ticks the box that indicates a detention will be given. Then she goes to the English office where she takes a standardised detention letter from the drawer. She fills it in and then goes to the reprographic room to have the letter copied. This will be done by the end of the school day when she will have to return to pick up the letter and its copy. (Teachers aren't allowed to use a photocopier themselves).

She finds Bob's home address in the computer system and writes it on an envelope, directing the photocopy to school files as the original now in its envelope is sent down to the main office for posting. Then Miss Brodie remembers to write details of Bob's detention notification in the English department detention book.

Thursday is English detention day. We are not allowed to clash with other departments' detention times. On the allotted day for Bob's detention, I pick up the detention book and the referral files and head for my classroom which is where the detentions happen after school - but must not last longer than half an hour according to school policy. Mr Booth supervises the detentions with me. We are a double act.

Pupils B and C have arrived as requested. They had been fighting in the corridor outside Miss Riley's room. Pupil D refuses to do homework and she has also arrived. Pupil E who scrawled graffiti in permanent pen all over one of Miss Twigg's windows is characteristically away from school on the day of the detention and must be re-processed. Pupils F & G have arrived at the third time of asking for swearing at a member of staff some four weeks ago and they can hardly remember the incident. Pupil A - our Bob - was in school but failed to turn up so he must also be re-processed and put on detention next week. Miss Brodie will have to go through the rigmarole again and in the meantime Bob will no doubt continue to be late for lessons.

If a pupil fails to turn up for his/her English detention twice in a row, only then may we refer the child to Mr Weasel the deputy headteacher for a senior teachers' detention. Mr Weasel often sighs and looks skywards when the names of detention refusers are finally presented to him - as if to say - I thought we'd made a detention net that would avoid any of the miscreants arriving at my door. Given the system, it is often six weeks before the identified child is passed to Mr Weasel and in the meantime other wrongdoing will have probably happened.

It was all a maze - like something out of Franz Kafka. It seemed to be designed on behalf of the children - not the hard-pressed staff who coped with misbehaviour like firefighters day after day. When I first started teaching, it used to be that you could say to a naughty child - right, you're on detention after school today. No letters, no phone calls, no reply slips, no hoops to go through. It happened there and then. And when the child got home late, its parents would ask why and when they heard about the detention their instinct would be to back up the school and say to the child, "Well don't do that again then!"

There's more I could say about the details of that crazy detention system but I hope that this description has at least given you a sense of how stupid and frustrating it all was. Of course, in the school in Bangkok, Thailand where I recently worked for a total of a year, I didn't need to put a single pupil on detention. There was no need to. They were happy to comply with reasonable authority and play by the rules. Funny that.
- December 27, 2013