Further evidence of the incompetence of the business lunch munching five star hotel crew known as the Football Association surfaces with the news that the Brazilian nut isn't going to take the job of England manager after all! What the hell is going on? The sweet F.A. tell us we are getting this oaf Scolari and then two days later Scolari snubs them. What a narro 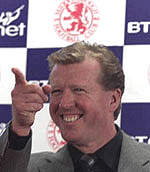 w escape we have had! It is as if my prayers and the prayers of thousands of other England supporters have been answered. Now I pray that the sweet F.A. do what they should have done in the first place and give the job to Steve McLaren. He's passionate but dignified and he will be a good diplomat for the success of the national team. I wonder if Scolari knows the Portugese word for "twat". If he looks it up, he will be staring at a description of himself. Come on England!
- April 29, 2006