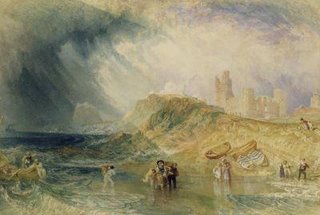 " Holy Island" (1820)
by Joseph Mallord William Turner (1775-1851)
I'm posting this picture in honour of Cliff, author of a fairly new Yorkshire blog called "Cliff's Column" which I can assure you, in spite of the title, is not the homepage of some superstud lothario! Cliff applauded arguably the greatest English painter of all time - J.W.B.Turner.
Turner was born in London in rather humble circumstances. At the age of twenty seven he became a member of the exclusive Royal Academy of Artists. In pursuit of his art, he travelled widely - first through Great Britain and then through Europe. His focus became wild nature, swirling mistily and mysteriously, leaving man dwarfed and overwhelmed.
In the selected painting above there has been some sort of shipwreck. People gather on the shore. The stormy sky merges with the stormy sea. Light above appears to promise a better world beyond this one. The setting is Lindisfarne or Holy Island off the Northumberland coast, the spiritual launchpad for Christianity in England - a wild, exposed place with its defiant castle and cathedral ruins, still reached by a tidal causeway, a place where monks continue to manufacture honeyed wine or mead. The other great English landscape artist, John Constable, referred to Turner's "airy visions". He was a watercolour pioneer - discovering that this medium enabled freer expression of his then rather unique perception of the elements.
By the way, Yorkshire Pudding with Mrs Pudding and the little puddings is away to Ireland on Thursday for his niece's wedding. If he survives the ceremony, the wedding feast, arguments with Aran islanders, the reading he's been asked to deliver and the gallons of Guinness that will undoubtedly flow into the early hours, he will be back to post again at the weekend. Please don't burgle Pudding Towers while he's away!
- April 04, 2006