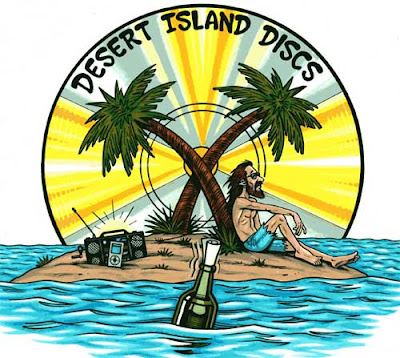 Desert Island Discs is a long-running BBC Radio 4 programme. It was first broadcast on 29 January 1942 and is the longest-running music programme in the history of radio. Guests are invited to imagine themselves cast away on a desert island, and to choose eight pieces of music to take with them. They are then asked which book they would take with them; they are automatically given Shakespeare's Complete Works and either the Bible or another appropriate religious or philosophical work.

Guests also choose one luxury, which must be inanimate and of no use in escaping the island or allowing communication from outside.

Here's an example - the film actor, Michael Caine. The extra book he picked was "The Fountainhead" by Ayn Rand and his luxury was a large bed with goose down and feather pillows. His pieces of music contained one or two surprises - "Viva La Viva" by Coldplay, "One Day Like This" by Elbow, Elgar's "Nimrod", "No Ordinary Morning" by Chicane, "Swollen" by Bent, "Move Closer" by Phyllis Nelson, Frank Sinatra's "My Way" and "Happy Xmas (War is Over)" by John Lennon and Yoko Ono.

So...dear blogland visitor what would be your choices if Kirsty Young of the BBC invited you to be the guest interviewee on next week's edition of "Desert Island Discs"? I guess this is like one of those "memes" that seem to have fallen out of fashion with bloggers. Here are my choices:-

"Blowing in The Wind" - Bob Dylan

"I Thought I was A Child" - Jackson Browne

"We Shall Overcome" (Albert & Seeger) sung by Joan Baez

and "Who Knows where The Time Goes?" sung by Sandy Denny

I guess that my music choices would change if I sat down to do this next Sunday morning as might my book and luxury choices. I would swap The Bible for The Koran as I have never read it and I am mystified by Islam. What's all the fuss about? Why these burkhas, these mosques, these people kneeling, these visits to Mecca, these fundamentalists? All very puzzling for a lifelong atheist. My other book would be "Le Grand Meaulnes" by Alain Fournier which I could read over and over such is its magical spell. The luxury would be my guitar with spare strings and an electronic tuner. I would sit under a palm tree on my desert island, beneath a full moon making up songs about the world I had left behind.

So what would your selections be if the BBC called you up for "Desert Island Discs"?