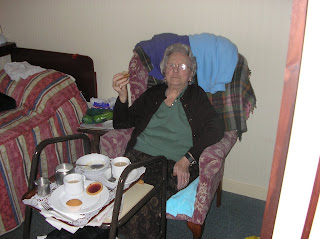 Mum in the room where she died
On Mothering Sunday those of us without mothers may feel a little sad. One recalls the bunches of early daffodils, the handmade cards, the chocolates that were given in days gone by when mum was alive. Not all mothers are good ones but I am sure that all mothers have their little foibles though I was lucky because my mum was the best mum in the world and since she died in September 2007, I have thought of her every single day.
I try to look beyond the room in that residential home where she became almost stupefied, that room with its corner sink, its stale odour of senility and its little window aperture with net curtains: that ante-room in which the monotony of waiting for death was broken only by insitutional mealtimes and irregular visits by the Bulgarian, Filipino and Polish careworkers who Mum insisted were "Kosovans".
I try to look beyond that room and I recall mum singing in our old kitchen in the heart of East Yorkshire..."There is a happy land far far away/ Where old Schonut kills his pigs three times a day" and "We'll gather lilacs in the spring again." She had a lovely, lilting voice - always in tune. I see her pegging out piles of washing under those old sycamore trees and darning her four sons' holey socks. I see the risen Yorkshire puddings on Sundays and her baked rice puddings speckled with nutmeg.
But Mum was more than a rather reluctant domestic goddess, she was a lifelong socialist and atheist in a conservative, god-fearing rural community. She knew everybody and everybody knew her. She was a pincher of babies' cheeks who seemed to mesmerise small children with her kindness and mischief for she never forgot what it is to be a child.
Mum could dance. She learnt German. She was a founder member of the village's Women's Institute and taught mixed crafts at evening classes for almost thirty years - glovemaking, lampshade making, basket weaving, embroidery, quilting, soft toy making. She was very clever that way. In her seventies, she bought a round the world air ticket, taking in Canada, New Zealand, Australia and of course India where she had married my father in December 1945 when they were sure that the war in the far east was over.
Mum had spirit, a real zest for life. Everybody was her equal. She had a strong sense of justice and was angered by injustice. She gave money regularly to Oxfam and the Salvation Army. She despised Margaret Thatcher and strangely that affable TV chef Ainsley Harriet. She collected buttons and nick nacks and plastered her fridge with tiny fruit stickers from bananas and apples.
She cried and she laughed. As a wife she loved my father passionately and as a mother she loved her four sons equally. I am so glad that my two children got to know her as a doting grandmother. And as I write this on Mothering Sunday, I know that I take some of mum with me wherever I go for subtly and secretly she has infiltrated my defences. Happy Mother's Day Mum. I still miss you.
- March 14, 2010