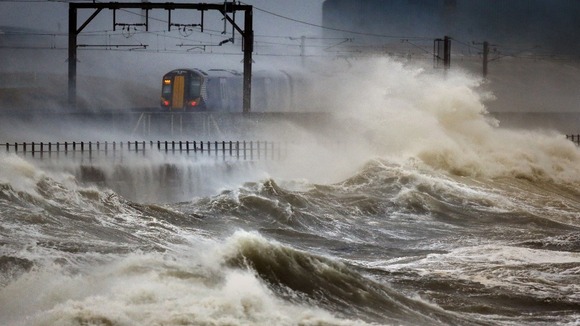 This dramatic picture from Saltcoats, Scotland has appeared in several British newspapers this morning. It shows a train travelling along the Ayrshire coast by the Firth of Clyde. In recent days, our national media has been filled with tales of meteorological doom and gloom as our country has apparently been battered by  a succession of winter storms surging in from the North Atlantic. In contrast, here in tropical Sheffield I am happy to report that the weather has been unexceptional and at times positively balmy.

Not for the first time, it has been interesting to observe the BBC generalising from the particular. Down in the south east - home to BBC people, politicians, Arabian sheikhs, bankers and the like there has been flooding and stormy weather. Rather arrogantly, news teams have concluded that this bad weather has been a nationwide phenomenon. It hasn't. The same thing happened during the so-called "Great Storm" of 1987.

It's the same when a street murder occurs in London. We hear all about it but if an identical murder happened Up North, it would be either overlooked or given minimal airtime. The London bias is often blatant but sometimes subtly endemic.

Meanwhile, in The Pudding Mansion, I am alone with a mug of tea. Shirley is doing a rare Saturday morning shift at the health centre. Frances is back at her flat in Leeds and Ian travelled back to London yesterday afternoon. It was so lovely to have them both at home this Christmastime. We feasted and relaxed and they met up with old friends. We are lucky to be blessed with two such kind, morally decent, fun-loving and hard-working "kids" - though they are not really "kids" any more. Ian will be thirty this year and Frances will be twenty six. How time flies.
- January 04, 2014