It seems like only yesterday that I first explored several of the Greek Islands - Rhodes, Folegandros, Hydra, Spetses, Sikinos, Myknonos, Naxos, Santorini, Skiathos, Delos etcetera. Yes. I saw a few and slept on plenty of beaches but I never made it to Crete. But on Thursday night that is where we will be for a week.

We will be staying here at The Castello Village Hotel in Sissi:- 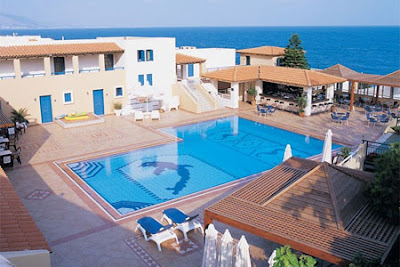 Shirley is keen to visit a small offshore island which in 1903 became a leper colony. It is called Spinalonga and for fifty years that's where most of Crete's unfortunate lepers lived, creating their own community. It was close enough to shore for easy transit of goods, workers and newcomers and far enough away to ease Cretan concerns about infection. Thankfully, in Europe at least,  leprosy was more or less completely eradicated in the 1960's. Here's Spinalonga:-

And I am keen to visit Knossos and its palace on the outskirts of Heraklion. Knossos is generally considered to be the site of Europe's oldest city. It was first developed around 7000 BC - with the first significant palace being constructed around 1900BC. It was here that King Minos lived and from where the legend of the Theseus and that devilish minotaur arose. It was a story that stuck in my head from when I first heard it in primary school. Ariadne, King Aegeus and of course the labyrinth were all part of the legend. Here's a view of Knossos:- 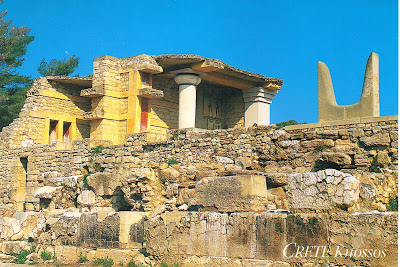 Apart from those trips, we want to swim and eat Greek food, lounge in the sun and read books. Whether or not I will be blogging from Crete I don't know but I will take this laptop just in case. Καληνύχτα! means "good night!" but it's all Greek to me.
- June 16, 2015