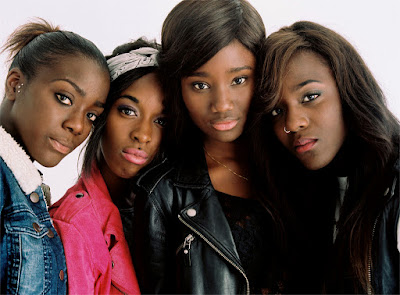 Last week I went to see another film at "The Showroom". It was "Girlhood" directed by Céline Sciamma. The dialogue was all in French so there were subtitles. Actually the French title for the film is "Bande de Filles" which can be best translated as "Gang of Girls" - not "Girlhood" - a title which perhaps deliberately echoes "Boyhood" (2014) directed by  Richard Linklater.

"Girlhood" is set in the suburbs of Paris, in a tough community which is largely of black African origin. In fact, white France is noteworthy because of its absence. The central character is Marieme (Vic) played by  Karidja Touré. She finds friendship with a gang of girls who allow her to forget her troubles and show her how to have fun. They dance. They laugh. They run away. But they also fight. They are tough cookies.

It is a film about the brightness of youth - its aspiration and its energy. Under their tough exteriors, the girls are quite vulnerable and just want to be loved, to be happy. The ending might seem unsatisfactory for there is no neat resolution but to me this was just right. Marieme has had a little cry but she realises that she must not give in to self-pity. She has to accept her lot and simply carry on.

I found it a charming and engaging film. There's laughter and friendship and the sparkling, frenetic vibrancy of youth. I am pleased that I bothered to go. It is not the France I remember from childhood visits there but this entire world is in so many ways very different from how it used to be.
- June 06, 2015