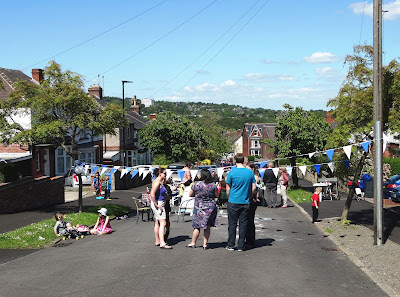 Still chasing my tail on this multi-faceted blog. Now I am going back to last Sunday in my attempt to bore unsuspecting blog visitors to tears and catch up with myself. Sunday was the day of our annual street party. The road was blocked off at both ends and chairs and tables were placed in the middle of our fresh  tarmacadam. A lot of people came out with drinks and cakes, salads and bread rolls. There was even a tray of homemade scotch eggs. At the risk of making John Gray of Welsh Wales green with envy, those scotch eggs were mouth-watering little blighters - far better than any shop bought scotch egg I have ever consumed. To die for as some are wont to say.


Your blog host was in charge of the barbecue, fending children off with my trusty trident and most happy to say again and again "They are not ready yet!" as I turned the sizzling burgers and prodded fat sausages, ensuring that they didn't slip to cremation in the white hot coals beneath the grill.

There was face painting and ball games and lots of gossip as neighbours caught up with one another. Old mixing with young and long time residents meeting the new. Sadly, Norma didn't join us. She is ninety this year and gets about on one of those electric mobility scooters. She has lived in the same house for eighty six years - moving in with her parents in 1929 soon after it was built . After World War II she met her husband to be - Paul - an evacuee from Czechoslovakia - and soon he moved in with Norma's parents who later passed away. About ten years ago Paul himself died and Norma has lived on her own ever since. Her only son is a veterinary surgeon in Never Never Land (i.e. Lancashire). In spite of her physical frailty, Norma remains as bright as a button and remembers just about everything. A shame she didn't make it to our street party.
It was the sixth annual street party and the weather was again kind - if a little blowy. At one point the mischievous wind caught one of the trolley barbecues and blew it over but the day was saved by The Head of Barbecuing who bravely righted the toppled cooking facility with some oven gloves and courageously swept up the glowing coals to warm applause from those assembled... and I wasn't even included in The Queen's Birthday Honours List! Can you believe it?
- June 13, 2015