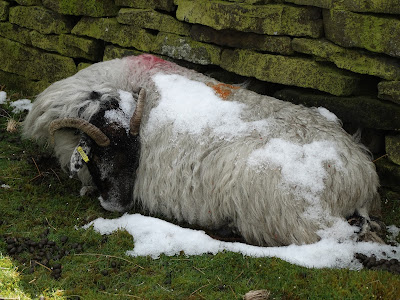 Why did she die? The night before had been chilly for April with snow flurries on the high moors. She snuggled down in the lee of a wall above Hordron Farm and died. Perhaps there was a complication with her pregnancy. Perhaps she just got old and it was her time to go.

That's not the way that I want to depart - curled up by an old stone wall in the middle of a cold night and on my own, never to see another dawn. Nearby two other sheep were watching me as I caught her image with my camera. I wonder if they felt anything at all about her passing.

Then yesterday as I rambled over the Midhope Moor to Pike Lowe, I had a joyous moment when I disturbed a mountain hare. It ran off through the rocks with the unmistakable whiteness of its underside showing. They are extremely rare in England but have been here for several millennia - much longer than the smaller brown hare which arrived during The Iron Age. This was the first time I had ever seen a wild mountain hare and I was thrilled.

Later, I descended the moors towards Gilroyd Lane and Midhope Reservoir. I passed several grouse butts. Then by the gate I saw my second mountain hare but she was stone dead. I guess she had been dead for three or four days because there were some flies around her and her innards seemed swollen. I turned her over looking for signs of a bullet hole. Perhaps she had been killed by a grouse shooter or gamekeeper but there were no signs of injury. I am guessing that she was hit by a passing vehicle on the adjacent country road. Either that or she was poisoned. The grouse shooting brigade don't like mountain hares or falcons or anything else that allegedly interferes with the doubtful pleasure of blasting small brown birds out of the sky.

The joy of the first sighting had given way to a feeling of sorrow and loss. We human beings are privileged to live on a planet that includes such varied and fascinating fauna. She may not have been a rhino or a tiger but the continued existence of mountain hares remains equally uncertain and challenging. If these beautiful creatures join the long list of the extinct then who is to blame?

Anyway, that's my nearby countryside. Not all evocative ruins and lunky holes and frolicking spring lambs and daffodils. Sometimes The Grim Reaper waves his scythe. Farewell Mrs Sheep and goodbye Ms Hare. I bet you both never imagined that you would make the blogosphere and live on just a little while longer. Rest in Peace. 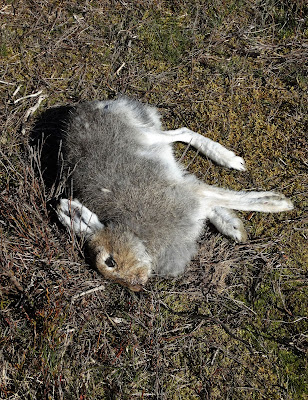