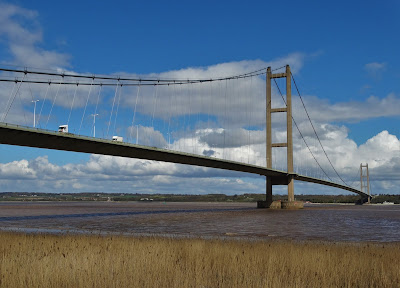 Does this happen to you? You encounter a complete stranger and before you know what's going on they have started to bare their souls - pouring out torrents of private information. The thing about these strangers is that they appear to be focused wholly on themselves. When the encounter ends you realise that they never sought any information about you and didn't appear to be interested either. It was all just "Me. Me. Me."

Yesterday, I had just one hour to spend in Barton upon Humber before travelling over The Humber Bridge ahead of Hull City's match with Leeds United. I pulled into the car park on the river's southern forehore and went to get my camera from the boot (American: trunk) intending to bag some pictures of a magnificent structure that was once the longest suspension bridge in the world.

And then the stranger spoke to me. Steve was sitting in an old but very shiny black Ford Fiesta and was forty five and a half years old. I know that because Steve told me. It was amongst many things Steve said in the next fifteen minutes. I learnt about his sister's death and her recent funeral, I learnt about Steve's own health issues. Steve even lifted his sweater to reveal the surgery scars on his lower belly.

Steve showed me his disabled parking badge and he told me the details of the Ministry of Transport test recently carried out on his beloved vehicle. I got the story of a difficult meeting at The Job Centre just after he had come out of hospital and of course I learnt about his favourite pizza toppings.

And all the time I was nodding, attempting to show polite interest as Steve rambled on. He learnt nothing about me. It was as if my own life was of such very tiny significance that there would be little  point in even asking.

My precious hour at Barton was disappearing like sand in an egg timer. Steve paused to take a breath and I leapt in to say that I'd love to hear more of what he had to say but I needed to get my photos now. Steve seemed a little downcast but I shook his hand and wished him good luck and went on my way.

When I got back to the car, I noticed that Steve had accosted another innocent visitor to the car park and he was now engaging her in one sided conversation. Perhaps Steve waits there all day, ensnaring folk with his everyday tales. I got into my car without Steve even noticing and drove on to Barton town centre.

Later, as I drove over the bridge, I reflected on how very many times I have found myself listening and nodding to people like Steve. I seem to attract them like a magnet when very often I just want to switch to "repel".
- April 25, 2016