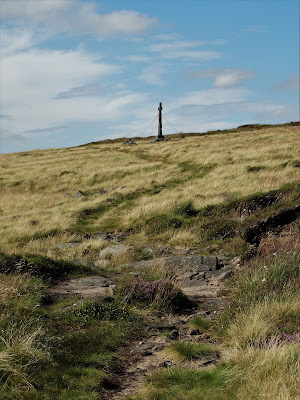 Did you see the lonesome moorland cross at the top of my last blogpost? I spotted it from afar and walked up there before heading back down to the valley bottom.

The cross was erected in memory of a certain James Platt who was the Member of Parliament for nearby Oldham. Platt was a partner in the largest machine-making firm in the world, Platt Bros. & Co., which manufactured machinery for the textile industry in Britain and overseas. In late August, 1857 he was with a grouse shooting party. They were walking across the moor and Platt was being followed by Josiah Radcliffe - The Mayor of Oldham.

The Oldham Chronicle of August 29th 1857 reported that
Mr Josiah Radcliffe was following Mr Platt at a distance of four or five yards when his foot slipped, and in recovering himself the trigger of the gun, which he was carrying at half-cock, appears to have been caught by his coat or his side, and as he threw himself partly round to recover his position the contents of the left barrel were lodged in the calf of Mr Platt's right leg. The unfortunate gentleman hopped a yard or two, threw his gun above his head, and exclaiming "Oh! oh!" fell to the ground.
It was a serious injury. Losing a lot of blood, Platt was carried down to the valley and medical help was immediately called for. The Chronicle continued with the tragic tale:-
Mr Josiah Radcliffe, the innocent cause of the calamity, was almost beside himself with grief, and it was feared for some time that he would lay violent hands on himself if not prevented by those around him. He took Mr Platt round the neck and bewailed his fate in the most heart-rending tears.

Unfortunately, the wailing and the calls for medical help were all in vain. James Platt died in a blood soaked bed in the now demolished Ashway Gap House - little more than ninety minutes after the accident.
The corpse presented the appearance of a marble statue, calm as if in peaceful sleep; and there can be little doubt that death was caused by the unconquerable haemorrage, the bed and mattress on  which the sufferer lay being completely saturated with blood.

So that was the end of poor James Platt. Gone and almost forgotten were it not for that windswept cross high on the moors of Saddleworth. It was an absurd death caused by the accidental discharge of a gun. Not the most noble or indeed the most pleasant way to go. 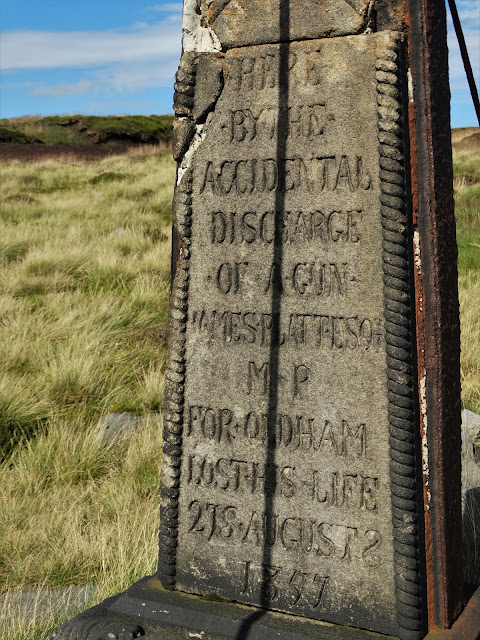