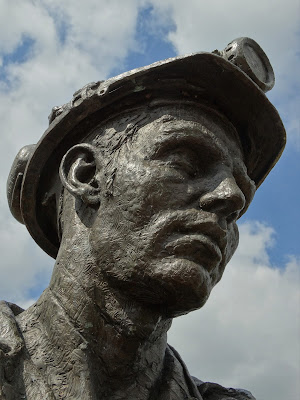 Once the land to the west of Teversal was scarred by coal mining. Great charcoal-grey mountains of slag altered the profile of the countryside and coal dust hung about the hedgerows, blowing on to Monday morning washing lines. In these ways it was not dissimilar from other villages in the North Nottinghamshire coalfield. 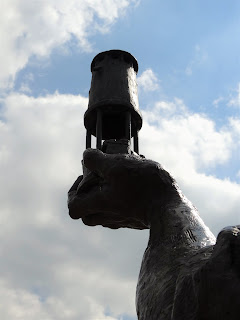 But now the coal mines have all gone. Silverhill Colliery is no more. Visitors from other parts of the country might think that the wooded hills near Teversal were natural, like miniature wolds. But dig down and you will still find the slag - all the useless waste brought up from below the earth's surface during  the quest for coal. It was a coalrush that took a hundred years to complete.

The tallest mound on the old Silverhill site is now the tallest point in the ancient county of Nottinghamshire and sitting on top of that artificial mound is a bronze statue of a miner holding a Davy safety lamp. Created in 2004 by Antony Dufort, "Testing for Gas"  pays homage to the lost coal industry, the people who worked in the pits and the tight, hard-working communities that coalmines created.

They were not what Margaret Thatcher called "the enemy within", they were the salt of the earth. Whenever I think of the adjective "Great" in Great Britain I think of coal miners and farmers, textile workers and ship builders, steel workers and engineers, not Margaret Thatcher or David Cameron or other toffs from Oxford and Cambridge. There are not many significant monuments to lost industries. Mostly those people get forgotten, relegated to unfortunate footnotes in the annals of history but "Testing for Gas" acknowledges and proclaims them, reminding visitors about coal and the heroes who mined it. 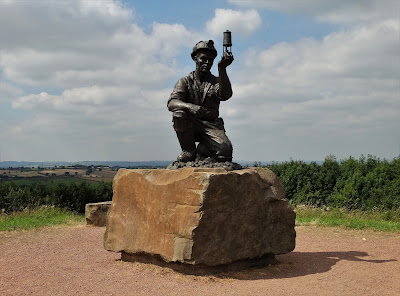