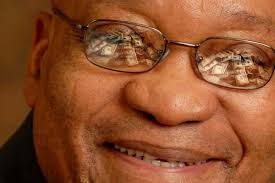 South Africa has already got its version of Donald Trump. He is called Jacob Zuma. Currently, he is considering the purchase of a luxury presidential airliner using public money. It will be fitted out like a five star hotel at a cost of four billion rand. And this will happen in a country where abject poverty remains endemic amongst the massive black underclass.

Flip a coin and there's Nelson Mandela on the shiny side. Zuma is the direct opposite. Where Mandela had intellect, education, compassion and vision, Zuma has got ignorance, self-interest and deception. He's arguably the main reason why his party, The African National Congress is faltering so badly in the polls. How can you trust a man like Zuma?

Back in 2011, Zuma began to dabble in Twitterworld. Perhaps he thought he could promote an image of himself that was busy, wholesome, positive and squeaky clean. Interestingly, he hasn't tweeted since 2013. He probably got bored with it all or privately admitted to himself that creating a believable new image was impossible . This was one of his tweets back in 2011:-

"Be that superhero"... How terribly ironic! Seventy four year old Zuma is a polygamist and has twenty children that he admits to by six different wives. There are strong rumours of others as well as rape and child sex allegations. And all of this in a country that has been crippled by AIDS. Yeah Jacob - "be that superhero"!

Stories of corruption surround him like flies round a manure heap. Repeated failures to disclose assets. Secret investments in the Congolese oil industry. Bribery. Misuse of public money. Bullying. Jobs for friends and family. And yet Zuma claims to be a committed Christian on a mission to lead his country to a better future. You just couldn't make it up.

The sooner Zuma goes the better but when he's gone who's next in line? Nelson Mandela must be turning uncomfortably in his grave. This isn't how The Rainbow Nation was meant to be. 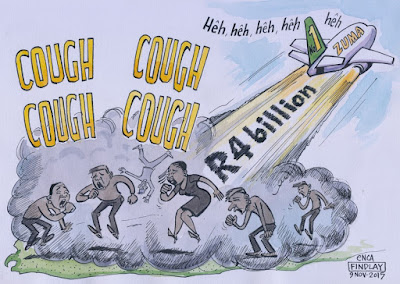